Former Barenaked Ladies frontman Steven Page opened up about his battle with depression to a packed house at Laurentian University's Fraser Auditorium Jan. 28. The candid talk was interspersed with performances of some of his original music.
Jan 29, 2016 4:31 PM By: Matt Durnan 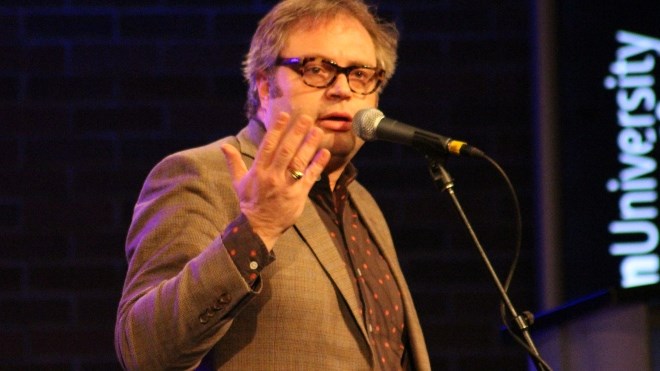 The candid talk was interspersed with performances of some of his original music.

Page opened the speech by talking about his 2008 drug arrest and the effect it had on him, but traced the origin of his battle with mental health issues back much further.

“When I was arrested I had already been diagnosed by a number of doctors, and had tried to get a handle on what my triggers were that would cause me to be depressed,” said Page.

“In 1994 when our (Barenaked Ladies) second album was coming out we were shooting a video for the song 'Jane,' I can remember lying in bed and literally not being able to get up. Eventually I had to have a friend come over and get me out of bed and get me going. If you watch the 'Jane' video you can see that I'm just really not with it.”

Page said the difficulty to get help for mental illness, mainly the timelines involved, make the disease so much more difficult to treat.

“My doctor told me that I should see a psychiatrist and that it would take about eight to 10 months to see one,” said Page. “Can you imagine being told you have heart disease or stage four cancer, but you have to wait eight to 10 months before you can see a specialist?”

Page said he was raised in a very caring and supportive family, and that in most cases, mental illness is something that is just inside of some people. He spoke about the challenges involved with getting treatment and getting comfortable with what your diagnosis may be.

“I think some people get set into this mindset that they've got a list of things that they would be OK with having, so they don't really open up completely,” said Page.

“You guys here at Laurentian are lucky. You have resources at your disposal and people to talk to, and if you go to talk to someone, don't go with a diagnosis in mind. These people are here to help, they can give you a road map of where to go and what to do.”