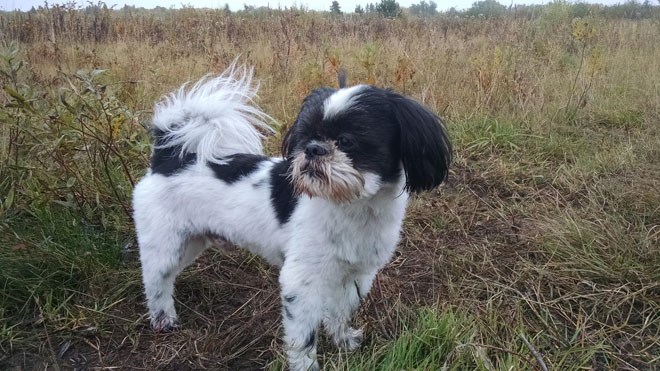 Bojangles the shih tzu was stolen from outside of the Notre Dame Food Basics Dec. 28. Supplied photo.

Bojangles the shih tzu is a dog who really lives up to the term “man's best friend.”

The nearly nine-year-old dog and his owner, 27-year-old former Canadian Forces serviceman Andrew Beaudin, are inseparable, walking about five kilometres a day together through the city.

At around 12:30 p.m. Dec. 28, Beaudin did what he's done many times before — he tied Bojangles up outside of the Food Basics on Notre Dame Avenue, and went inside for a few minutes to purchase groceries.

This time, however, he came out to find Bojangles gone. All that remained was the dog's leash, still secured to the metal loop where Beaudin had tied it.

“There were security cameras outside of Food Basics, and they did catch actually somebody stealing my dog,” Beaudin said.

He said the footage shows that a woman got out of a white car, unclipped and picked up the dog, and put him in the vehicle, which then fled towards Kathleen Street.

While Beaudin said Greater Sudbury Police are investigating, he's made his own efforts to find his dog, phoning the local animal shelter and animal rescue organizations to see if Bojangles is there.

Photos of the dog and a description of the situation Beaudin put up on his Facebook page — he goes by the pseudonym Russell Shackleford on social media — have been widely shared.

Beaudin said he's not sure what the dognapper's motivation was.

Perhaps it was a misguided person who thought the pooch wasn't being well cared for, and decided to take him, he said.

They could have also just wanted the dog for themselves, Beaudin said. Purebred shih tzus are expensive, and Bojangles looks much younger than his age.

“I would have to say that there's not a chance in hell that they would deserve a good dog like that,” he said.

“He was well loved and well cared for. They're hurting two lives right now by doing what they did — myself and my dog. I'm quite sure my dog isn't very happy. Neither am I.”

Beaudin is offering a $400 reward for his dog's return. He said if Bojangles is returned to him, he won't ask questions. Bojangles is black and white, unfixed, and was wearing red boots at the time of his theft.