The Sudbury and District Health Unit is laying off four employees as it deals with a funding freeze from the province.
Nov 21, 2015 8:26 PM By: Jonathan Migneault 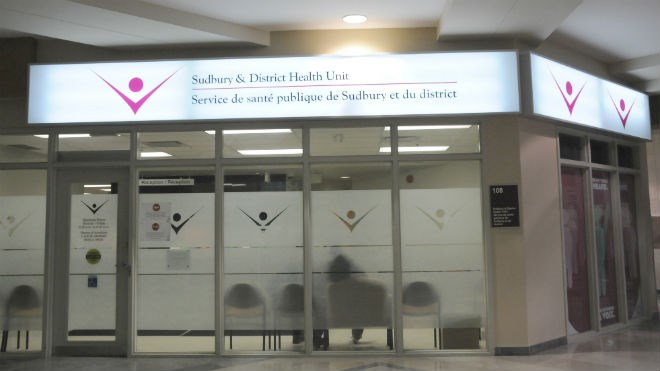 “This is the beginning of a difficult time for public health and it's important for us to rally, work together and understand what our ultimate goals are in the health system,” said Dr. Penny Sutcliffe, the health unit's medical officer of health.

Most health units receive around 75 per cent of their funding from the province, and 25 per cent from their respective municipalities.

In the past, both shares increased around two per cent annually to keep up with inflation and rising costs. But under a new funding model, the province has frozen its share of public health funding in 28 of Ontario's 36 health units.

The new funding model takes several factors into consideration – including population and geography – to determine how the total pie of provincial health spending should be shared across the 36 health units.

The province determined that eight health units – primarily in urban areas around the Greater Toronto Area with high population growth – would continue to receive a two-per-cent funding increase per year.

For the Sudbury and District Health Unit, that meant the board approved a 0.55 per cent reduction to the 2016 budget, compared to the previous year.

With a funding shortfall of $562,645, Sutcliffe said the health unit's board has had to make difficult decisions to avoid even larger shortfalls in future years.

“We could muddle our way through 2016, and find the dollars, but that would be unwise because we're facing significant cuts,” she said.

The four positions cut due to the new budget include a manager of health promotion and three office support positions.

But Sutcliffe said the health unit will create a new position for one of the support staff, effectively reducing the number of layoffs.

The Sudbury and District Health Unit has joined a growing chorus, which includes other health units in the northeast, opposing the new public health funding model.

Sutcliffe said public health is an important part of Ontario's health-care system, and with strong support can help keep the population healthier and reduce costs overall.

Sutcliffe said less than 1.5 per cent of Ontario's total health care spending goes to public health, and questioned whether the total pie should be bigger.

Letter: Does Canada really need to spend $19B on F35 jets?
Oct 20, 2020 8:00 PM
Comments
We welcome your feedback and encourage you to share your thoughts. We ask that you be respectful of others and their points of view, refrain from personal attacks and stay on topic. To learn about our commenting policies and how we moderate, please read our Community Guidelines.