From the rez to research

At one time, Kyle Francis wasn't much different from the group of Wikwemikong youth who gathered at the Steelworkers Hall in Sudbury July 15 to hear him speak.
Jul 16, 2012 7:41 PM By: Heidi Ulrichsen 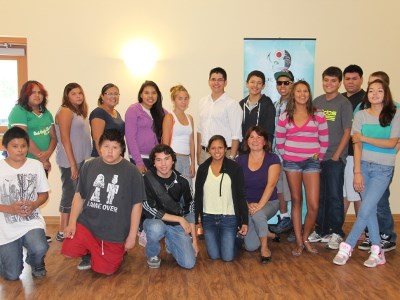 PhD candidate and Wikwemikong native Kyle Francis (top row, centre, in white shirt) gave a presentation at the Steelworkers Hall in Sudbury July 15 as part of the Shkagamik-Kwe Health Centre's new Aboriginal Youth Speaker Series. He's seen here with a group of Wikwemikong youth who travelled to Sudbury to hear him speak. Photo by Heidi Ulrichsen.

At one time, Kyle Francis wasn't much different from the group of Wikwemikong youth who gathered at the Steelworkers Hall in Sudbury July 15 to hear him speak.

The 26-year-old spent part of his childhood in the Manitoulin Island First Nation community, moving to Sudbury with his family when he was 12 to attend St. Raphael Catholic Elementary School and later St. Charles College.

After earning a bachelor's degree in biology from McMaster University, Francis went on to complete a master's degree at the University of Edinburgh in Scotland, where he's been doing medical research on ovarian cancer.

He's currently about two years away from completing his PhD.

“It's good, letting people know what they can do,” Francis, who gave a presentation as part of the Shkagamik-Kwe Health Centre's new Aboriginal Youth Speaker Series, said.

“With First Nations people, a lot of our tuition is paid for, but a lot of people don't use it. I'm just showing them what I did, and hopefully helping to guide them.

“Hopefully they take something back from the presentation, even if it's the most minor thing.”

While he had entered his undergraduate program with the goal of applying for medical school, during his third year of university, a McMaster professor gave a presentation on her medical research.

This presentation was to be a turning point in his student career.

He asked the professor if she would mind taking him on as a research assistant and teaching him the basics of medical research. She agreed.

“My undergrad professor always used to say 'Too many people are going into medicine, and we need more scientists,'” Francis laughs.

When it came to applying to a master's program, he decided he wanted to expand his horizons. “I wanted to become an international student just to get a taste of some other city, and to become more cultured,” Francis said.

He said his research focuses on using new drugs to get rid of late-stage ovarian cancer by targeting specific proteins in cancer cells.

While Francis enjoys what he does, he said that sometimes medical researchers need to develop a “tough skin.”

“Sometimes experiments don't work, or you don't know why they don't work or what happened,” he said. “You've got to troubleshoot the whole procedure yourself to see what happened.”

Francis said he's always set goals for himself ever since he was a kid. He said his ultimate reward will be having a job he loves. “It's not all about money,” he said. “It's just something I can picture myself doing for a long period of time.”

While he's not sure where he'll be working once he's done school, he said he'd like to live somewhere in Canada.

He said he's not the greatest at school, but he knows he can do better. After hearing Francis' story, he said he plans to get better marks starting this fall, and work hard towards his ultimate goal of becoming a police officer.

Fourteen-year-old Landon Peltier, also from Wikwemikong, said he was encouraged by the presentation.

“It was a very inspirational speech in terms of how he tried and made his grades better,” he said. “It's pretty cool how he wants to become a cancer research guy and stop cancer.”

Francis' parents, Roselynda and Mark Francis, and his younger brother, Keaton, were among those in the audience.

Roselynda, a teacher at Sudbury Secondary School, is working at a Wikwemikong teen program this summer, and arranged for the participants to listen to her son's presentation.

“I just love it when he can show what he's accomplished, and I know he is inspiring others,” she said.

“These youth here — the fact that they came here and saw him and listened to him, and the fact that he is from Wiki — hopefully they can envision something big for themselves too.”

She said her son has always been a very motivated, goal-oriented person.

“Back to when he was living with us, and he was high school age at St. Charles, he had a priority and did his work. He'd be sitting at that computer and research whatever he had to do at school, and he'd find efficient ways to do it.”

Angela Recollet, executive director of the Shkagamik-Kwe Health Centre, said the new speaker series is designed to showcase First Nations youth who have been successful in their respective fields.

Francis is an “exceptional role model” for First Nations youth, and a great choice as the inaugural speaker in the series, she said.

“I think he was very truthful and honest about what his journey is,” Recollet said. “He spoke about his goals right from day one, and how he continuously achieved them.”