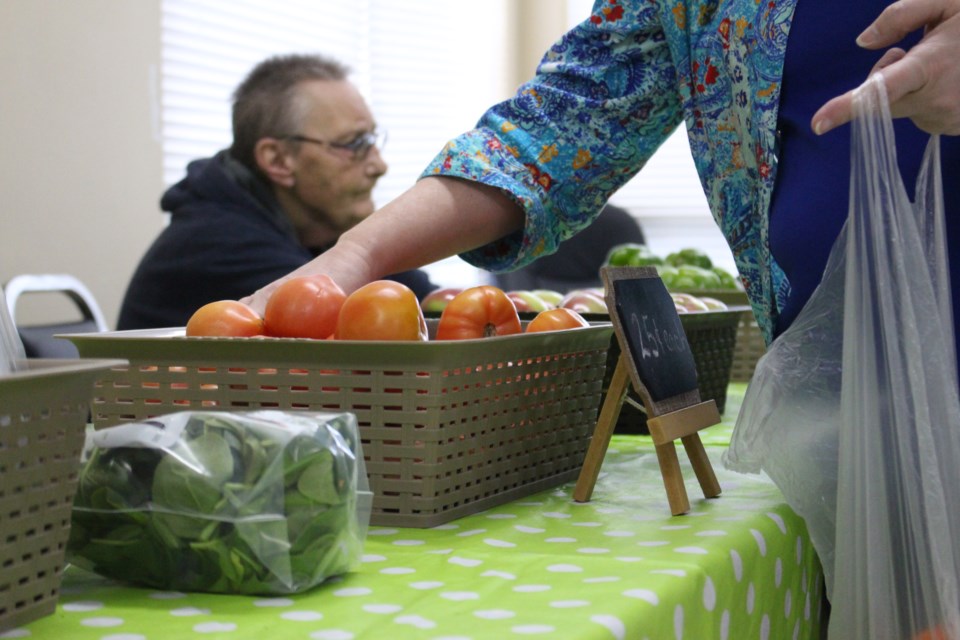 The Fair Food Market (pictured) is just one of several local programs that help the most vulnerable Greater Sudbury residents in jeopardy if the city moves forward with a $50,000 cut to the Social Planning Council budget. (Keira Ferguson / Sudbury.com)

When city council received their draft budget earlier this month, they were told some cuts were necessary to keep the tax increase to 3.5 per cent.

Among those cuts was a $50,000 annual grant to the Social Planning Council (https://spcsudbury.ca/about/), a non-profit organization that isn't well known in the public, but works on a number of fronts to help the most vulnerable residents of the ?Nickel City.

Most of its funding comes from the private sector and upper levels of government, but it relies on the $50,000 from the city to pay basic expenses such as rent and insurance for its Larch Street office.

In a news release Thursday, Richard Eberhardt, chair of the group's board of directors, said if the funding cut isn't reversed, it “will mean the end of programs and loss of five full-time jobs.”

While the organization is very successful at bringing in funding from other private and public sources to complete projects and maintain salaries, funds from the city are critical.

“Grant funding in Ontario has changed,” Eberhardt is quoted as saying in the release. “Project costs, and staffing costs are available, but no one wants to pay for basics like phones, or photocopying, or a mandatory annual audit.

“As we have been working closely with the city for decades as a core funder, we have been able to shift these expenses to that budget and maximize our project funding. To have that pulled out from under us puts the future of the Social Planning Council in doubt.”

While initial talks with Mayor Brian Bigger and the rest of city council have been encouraging, the release said the fact they are not a well-known organization makes it easier to cut their funding.

“With a commitment to social equality and addressing the root causes of issues like poverty, the work the Social Planning Council does rarely makes headlines, but is highly valued by direct users and community groups,” the release said. “Operating programs like the Flour Mill Community Farm and the NOAH Community Hub, and supporting broad policy development work alongside city staff — including the city’s sweeping Social Development Strategy — means the $50,000 grant goes a long way.”

“This funding cut will mean great loss for us,” Lynn McMurray, president of the 1960 Paris St. tenant group Positive Connections, is quoted as saying in the release.

McMurray has worked extensively with SPC staff, and has volunteered at the Fair Food Markets set up at the housing complex.

“Without the SPCS me, my family and our community will face a major deficit as we will lose the Fair Food Market, Food Rescue and the Safety Group ... They have provided mentorship, guidance and access to community seed grants which pay for children's activities, transportation, training, meeting expenses and office supplies.”

“Since 2015, the Social Planning Council has been supporting the Ward 8 Community Action Network with engagement and community building in our ward,” Rachelle Niemela, chair of the Ward 8 CAN, is quoted as saying.

“They have helped with visioning sessions; conducted asset mapping exercises; have been partners in our election town halls; and have helped us with community outreach strategies and techniques for pop-ups and support for community building at the social housing complexes in our ward.

“We are part of NOAH Community Hub and the monthly meetings that they hold have proven to be invaluable in engaging people in economic situations who might not otherwise have a voice in our ward. Without them, we would not be as engaged in our community as we are today.”

The $50,000 grant “is excellent value for money,” the release said. “If the city considered the impact of innovative programs like the Fair Food Market or the Flour Mill Community Farm as coming directly from that grant, it would better see the value.”

“The Social Planning Council exists to build and strengthen our community,” Eberhardt says in the release. “That’s why most cities fund their local social planning councils. Right now, we are leveraging $50,000 of base operating funding from the city to employ five dedicated individuals helping to make Sudbury a better place to live.

“We want that work to continue, and hope that Mayor Bigger and the rest of council agree.”