Gélinas pleased with news of a French university, but calls funding 'weird'

Ontario gov't won't pay its portion of project until after next election; feds funding school until then
0
Sep 10, 2019 6:01 PM By: Heidi Ulrichsen 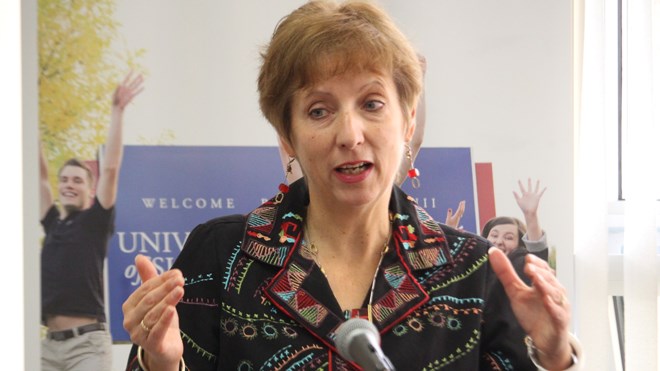 One of the original proponents of the creation of a French-language university in Ontario, Nickel Belt New Democrat MPP France Gélinas, said she's happy to see the project move forward after its 2018 cancellation.

But she said she said the way the project is being funded is, in her opinion, “weird.”

According to a story from Canadian Press, the Ontario and federal governments reached an agreement last week on jointly funding a proposed French-language university that Premier Doug Ford's government had previously scrapped.

The two governments issued a statement Saturday saying they've signed a "memorandum of understanding" (MOU) that formally commits them to working together to establish the school.

The MOU says the fed's contribution to the project "will not exceed 50 per cent of the total cost incurred by Ontario.”

CTV Toronto reports Ontario taxpayers won't have to pay for their portion until after the next provincial election.

“It’s an eight-year agreement. The federal government will be paying half, and we’ll be paying the other half.”

Canadian Press said the provincial Tories had cancelled the project in November as part of their effort to balance the books, sparking outrage and protests among Franco-Ontarians.

The decision prompted then-Tory legislator Amanda Simard to leave the party caucus and sit as an independent.

But last week Ford's Progressive Conservative government announced it had secured half of the funding for the estimated $126-million project, and it invited Ottawa to kick in the other half.

The province has said the school will take eight years to be completed.

By signing the MOU, both governments say they are affirming their commitment to address the post-secondary education needs of Ontario's more than 600,000 Francophones.

Gélinas, who's the NDP's critic for health care, and was previously the critic for Francophone Affairs***, tabled two private member's bills for the creation of a Francophone university in Ontario.

The first time was five years ago, and it received unanimous support in second reading in 2015, but the bill died when the legislature was prorogued.

Then she tabled it again two years ago, in the fall of 2017, and the project was adopted by the previous Wynne Liberal government, which, of course, lost the election to the Progressive Conservatives in June of last year.

The Francophone university project was cancelled by the Tories in November 2018, but by December, the federal government had offered to pay part of the costs.

“The federal government put money on the table, but they never looked at it,” Gélinas said, adding that post-secondary education is actually a provincial responsibility.

“They were not interested. And then in the last couple of weeks they started to look at the money the federal government was willing to give.

“Basically they accepted the money the federal government is giving, and they gave nothing. They're not going to give anything unless they win the next election.”

Gélinas said there was a huge backlash from the 700,000 Franco-Ontarians when the project was cancelled.

She said she's glad to see the project go ahead, but given the way it's being funded, “do I see a huge change in the Ford government treatment of the Francophones? Not really.”

Asked if there's any risk of cancellation in four years' time, Gélinas said it would be a whole lot harder to cancel a university already in existence than one in the planning stages.

The educational institution will likely be based out of rented space in downtown Toronto, and serve southern and southwestern Ontario.

She said it's an important project so that people can continue their education in French.

There are already several other bilingual and Francophone post-secondary institutions in Ontario. That includes bilingual Laurentian University and francophone Collège Boréal here in Sudbury.

Gélinas said she hopes the new Francophone university will benefit these Northern Ontario schools by raising awareness overall of French-language higher education in Ontario among both domestic and international students.