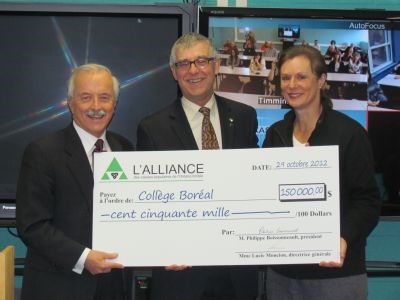 Revealed during a videoconference involving the college's Nipissing, Hearst, Kapuskasing and Timmins campuses, this donation brings the “Leading us to prosperity” campaign to $3.7 million. The campaign has an objective of $5 million.

"We are particularly happy that a key player in the financial world, well known for its community involvement, is investing in the excellence of our educational programs by stressing the undeniable contribution of Collège Boréal to the Francophone college system in Ontario.

“Thanks to L’Alliance des caisses populaires de l’Ontario, Collège Boréal continues its growth with a view to offering young Franco-Ontarians the post-secondary education they deserve and career opportunities worthy of their great potential and high ambitions."

L’Alliance des Caisses populaires de l’Ontario limitée is very proud to be associated with the development of Collège Boréal for the greater good of its students, Philippe Boissonneault, president of the organization, said.

“We have made many major contributions over the years and we continue to support initiatives aimed at the progress of post-secondary education,” he said.

“We consider it important to support the young people in our regions so they may receive their education in French close to where they live. L’Alliance and its member caisses share values similar to those of Collège Boréal by stressing the worth of each individual and maintaining them at the core of our operations.

“Our organizations contribute to the development of Northern Ontario, Collège Boréal on the educational front and the Alliance on the financial front. These are business partnerships that will ensure the growth and sustainability of our respective communities and networks."

The Collège Boréal Foundation provided more than 2,000 bursaries to students of the Collège; for 2011-2012, this represents close to $1.4 million.

So far, the foundation's endowment fund is the highest of all colleges per student, and exceeds $10.7 million.