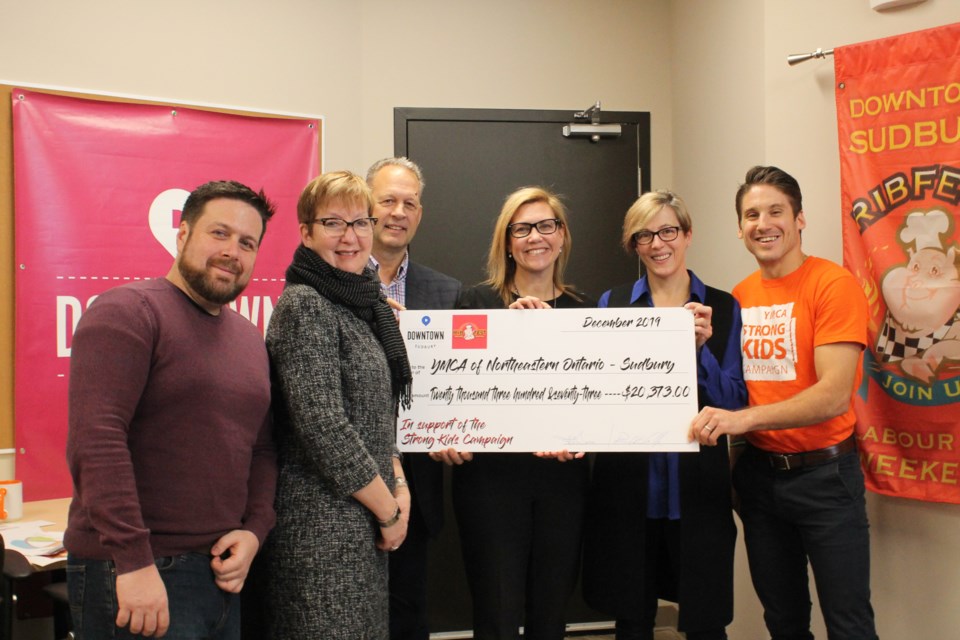 The 12th Annual Downtown Sudbury Ribfest, which took place over the Labour Day weekend, is now just a memory, but the proceeds from the event were presented to its charity of choice on Giving Tuesday Dec. 3.

That charity of choice is YMCA of Northeastern Ontario's Strong Kids Campaign, which received a cheque for $20,373 from Downtown Sudbury.

The YMCA, in turn, co-ordinated the volunteers for the festival. Downtown Sudbury wouldn't be able to put on Ribfest without this volunteer support, as it only has three permanent staff members.

More than 50,000 people took part in Ribfest this year over three days. The event included 26 local bands, festival foods, children’s activities and of course the ribs.

“There is a great deal that goes into hosting an event this size but it is thanks to the community support that Ribfest is the success it is – and – that such a significant donation can be made to the YMCA Strong Kids Campaign,” said a press release from Downtown Sudbury.

“We are already looking forward to the 2020 edition of our Downtown Sudbury Ribfest!”

Most Sudbury gas stations charging 123.9 as we head into the weekend
Jan 17, 2020 7:43 AM
Comments
We welcome your feedback and encourage you to share your thoughts on this story. We ask that you be respectful of others and their points of view, refrain from personal attacks and stay on topic. To learn about our commenting policies and how we moderate, please read our Community Guidelines.

State of emergency declared in St. John's, up to 75 cm of snow expected
0

Vagnini to serve another term as police board chair
0