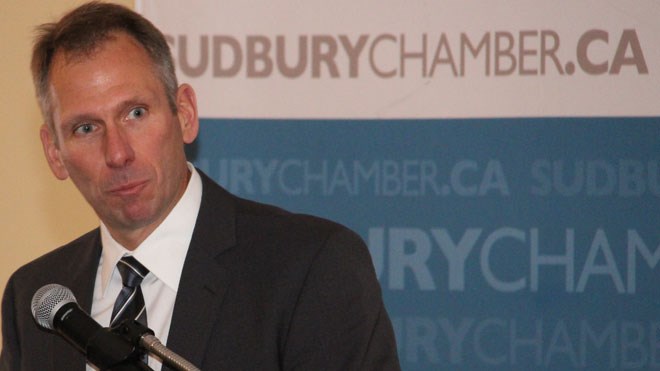 Boissonneault, who addressed the Greater Sudbury Chamber of Commerce Tuesday, said the mining giant is eyeing two potential Sudbury developments that would require mine shafts as deep as 2,700 metres.

The first project is Onaping Mine, a site that was discovered years ago, but contains ultra-deep deposits that could not be safely accessed until recently.

Glencore estimates the mine contains 15.7 million tonnes of nickel deposits at higher grades than average for the Sudbury Basin, and would require a capital expenditure of $547 million to develop.

The company is expected to complete a pre-feasibility study for the project later in the year, and will decide by the first or second quarter next year whether it would be worthwhile to mine the deep deposits.

“Given our life of mine situation, we would like to get started on it soon,” Boissonneault said.

Glencore's flagship mine in Sudbury, Nickel Rim, has a mine life that should extend until around 2020, he said.

Glencore is currently exploring a second deposit near Nickel Rim, but about 1,000 metres deeper than the current mine – which extends to around 1,700 metres underground.

“We see it as the likely future of Nickel Rim,” Boissonneault said.

If the deposit proves to be feasible, along with the Onaping Mine it could extend Glencore's Sudbury nickel production until the mid-2030s.

At 2,700 metres, both projects would qualify as ultra-deep mines, and would pose a number of technical challenges.

“Deep mining will require geo-technical management that is a lot more modern,” Boissonneault said. “Geo-technically, what happens, is that the stress increases at depth.”

One challenge is cooling mine shafts at those depths, which get warmer with every added metre underground.

Boissonneault said Glencore has explored using cold lake water to cool the mines, instead of the more expensive refrigeration systems used in a typical mine.

Parts of Toronto draw in cool water from Lake Ontario to cool buildings near the waterfront, and Boissonneault said Glencore could use a similar system for Onaping and Nickel Rim.

In January, the Sudbury-based Centre for Excellence in Mining Innovation (CEMI) received a $15-million grant from the federal government's Business-led Networks of Centres of Excellence program to pursue research to make ultra-deep mining — deeper than 2.5 kilometres or roughly 8,000 feet — more efficient and productive.

“The ventilation cost is the single largest cost for any underground mine,” said Douglas Morrison, CEMI's president and CEO. “And to make that single cost larger has a very large impact on the overall viability of the mine.”

Mines are typically cooled through a natural heat exchange system – where air is cooled down at surface and pumped underground.

Because the air heats up as it is pumped deeper underground – the system is no longer effective beyond the 2.5-km point.

Using cold lake water to cool a deep mine could get around current ventilation limitations.

CEMI is also exploring new techniques to support underground tunnels, which will help make mines safer, and more productive as they go deeper.