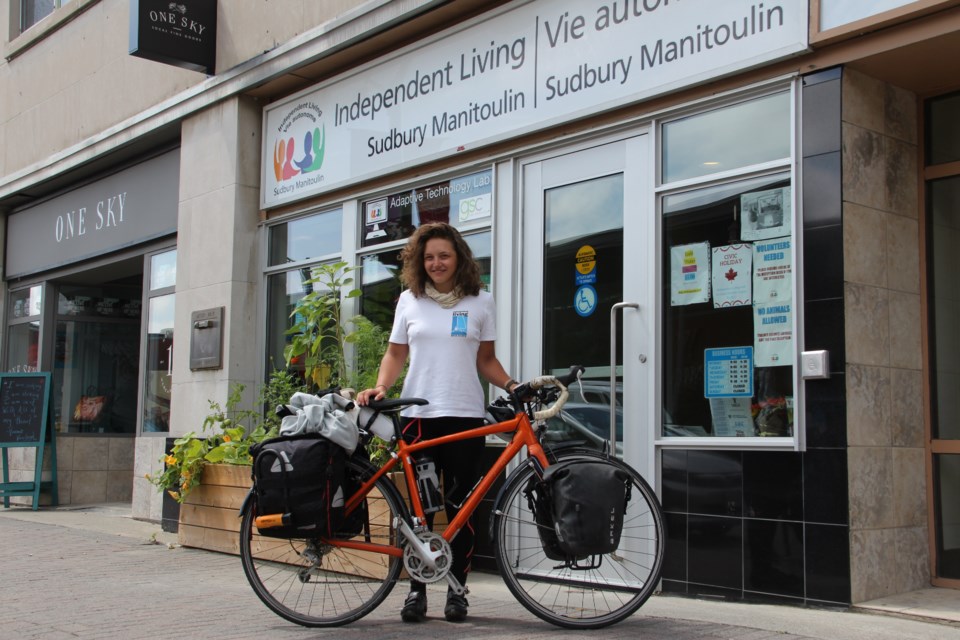 The 25-year-old departed from Vancouver on June 22 and has been pedaling her way across the country to raise money for Independent Living Nova Scotia, an organization that is near and dear to her heart.

McNee is riding in memory of her friend Sarah Dubé, who passed away in November 2016 at the age of 28, after living with muscular dystrophy.

"I was really missing her (Sarah) after she passed and started feeling that life is short and she and I always talked about travelling Canada, so she really inspired this," said McNee.

"Independent Living is something that was very important to Sarah. She was always very much in control of her own life and was an advocate for people with disabilities being able to maintain their independence."

Riding a bicycle across Canada is a daunting undertaking for anyone, but especially in McNee's case, as she's going it alone without any support vehicle travelling alongside her.

She has been calling campgrounds home for a number of nights, as well as stopping in to stay with family, friends, and friends of friends along the way.

"It's a challenge both mentally and phyiscally," said McNee. "I've always been kind of introverted so it doesn't bother me to be riding alone, but there have definitely been days where I've had trouble motivating myself and it would be nice to have someone there to push me."

Raised in Toronto, McNee now lives in Halifax, NS, her home for the last seven years. Getting back to Ontario has been refreshing for her and she says that it's been incredible to revisit some places she hasn't seen in years.

"Riding through Northern Ontario has been amazing, it's been so long since I've been up there around Lake Superior and you forget how beautiful it is," said McNee. "I also forgot just how big Ontario is, I had it in my head that Thunder Bay to Sudbury wasn't really that far, but I was a little off on that one."

The remainder of the ride will be a winding one for McNee, as she won't actually be crossing the "finish line" in her home province. McNee will be hopping on a few ferries as she makes her way through the maritimes, ultimately finishing in St. John's, NFLD.

"I wanted to go through every province on this ride so I'm going to end in Newfoundland, hopefully by the end of September because the weather can be a little trick out there if I go any later," said McNee.

You can follow along with Grace's journey and find information on how to donate to her cause at graceonabike.wordpress.com.

Sudbury gas prices jump 5 cents per litre to 121.9
Feb 19, 2020 7:30 AM
Comments
We welcome your feedback and encourage you to share your thoughts on this story. We ask that you be respectful of others and their points of view, refrain from personal attacks and stay on topic. To learn about our commenting policies and how we moderate, please read our Community Guidelines.

Good morning, Greater Sudbury! Here are some stories to start your day
0