Rate is far higher than Toronto, Peel, Ottawa, Windsor or Niagara, and is the highest in the North
Dec 1, 2020 2:45 PM By: Len Gillis, local journalism initiative reporter 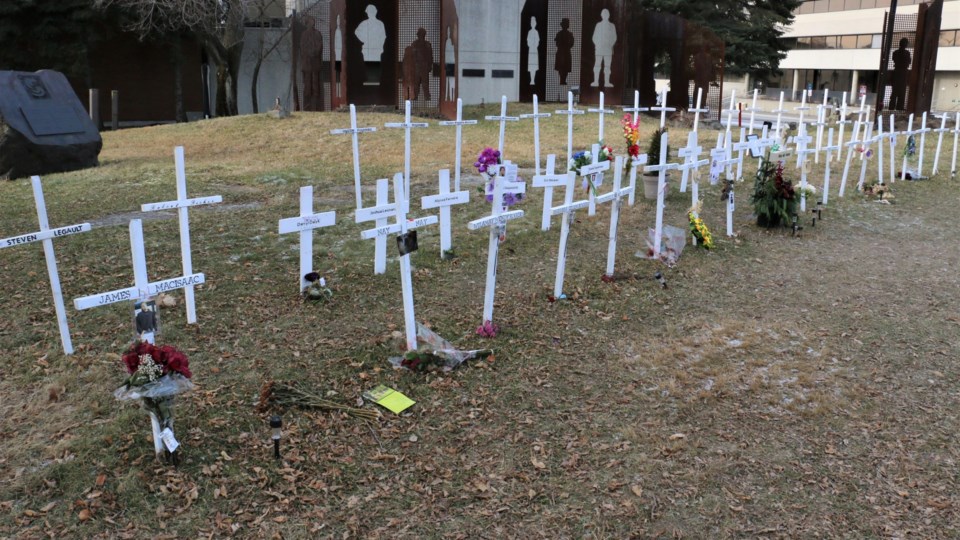 A memorial to people who have died due to opioids has been put up in downtown Sudbury this fall. (File)

Statistics from Public Health Ontario (PHO) show the opioid-related death rates in many parts of Northern Ontario are significantly higher than the numbers being reported by Toronto Public Health and some other southern Ontario locations.

For comparison purposes, statistics were compiled in quarterly segments from the end of March 2019, through to the end March of 2020, which was the one-year time period with the latest available information on Emergency Room visits, hospitalizations and opioid-related deaths.

In the first quarter of this year, just in the Public Health Sudbury and Districts (PHSD) jurisdiction, the rate of opioid deaths was listed at 41.9 per 100,000 population, an increase of 16.7 per cent from the previous year.

This was based on a population of 200,424 within the jurisdiction of the Sudbury health unit, which includes the City of Greater Sudbury and several surrounding smaller communities, such as Espanola, Chapleau and on Manitoulin Island.

Public Health Ontario said this accounts for 21 deaths in the first three months of this year for the PHSD service area. The Sudbury health unit's own opioid surveillance program reports that from January 2020 to June 2020, opioids have claimed 44 lives.

The Sudbury health unit jurisdiction, in the first three months of this year, also had an opioid death rate more than three times higher than the national rate in Canada, which is 12.1 deaths per 100,000 residents.

The lower rate was evident in other parts of southern Ontario.

In the jurisdiction of Ottawa Public Health, the rate of opioid deaths was lower at 7.7 per 100,000, the first three months of this year. This was for a population of slightly more than one million.

In the Peel region, Peel Public Health reported an even lower fatality rate of 7.6 per 100,000 residents, for a population listed at more than 1.5 million.

In the Niagara Public Health Region, the death rate in the first three months this year was reported at 23.1 per 100,000 population for a region of more than 468,000 residents.

Back to Northern Ontario, the rates were far higher in general.

The Porcupine Health Unit, representing Timmins and several other smaller northern towns, also has a high rate of opioid deaths according to the PHO stats. For the first three months of this year, the death rate attributed to opioids was 32.8 per 100,000 population, three times the Toronto rate. This was for a population of 85,273.

Figures for the Thunder Bay District Health Unit (TBDHU) for the first quarter of this year revealed a mortality rate of 28.5 per 100,000 population. This was for a population of nearly 155,000 in the TBDHU jurisdiction.

For the North Bay Parry Sound District Health Unit it was revealed that the rate of opioid deaths was 18.6 per 100,000 population. This was for a region of more than 129,000 residents.

The Timiskaming Health Unit, which includes such communities as Kirkland Lake and Temiskaming Shores, the rate was 12.1 per 100,000 for a jurisdiction with a population of more than 33,000 residents. Four deaths occurred in that jurisdiction between March 2019 and March 2020.

Further west in the jurisdiction of the Northwestern Health Unit, for communities such as Kenora, Red Lake and Dryden, the mortality rate for the first three months of this year was 9.8 per 100,000, a couple of points lower than Toronto. This was for a population just short of 82,000.

A full report on the patterns of opioid-related deaths in Ontario during 2020 the pandemic may be causing some unintended consequences.

"In June 2020, Ontario’s Chief Coroner announced a 25 per cent increase in suspected drug-related deaths between March and May 2020, compared to the monthly median reported in 2019. Similar trends have been reported elsewhere in Canada," said the report.

"It is expected that this increase in drug-related deaths is being driven by a combination of numerous factors, including an increasingly toxic unregulated (‘street’) drug supply, barriers to access to harm reduction services and treatment, and physical distancing requirements leading to more people using drugs alone."