It's been decades since Mike Boudreau has been able to fish Little Missinaibi Lake, a 20-mile long water body that's part of the Chapleau game preserve.
Oct 2, 2013 7:21 PM By: Darren MacDonald 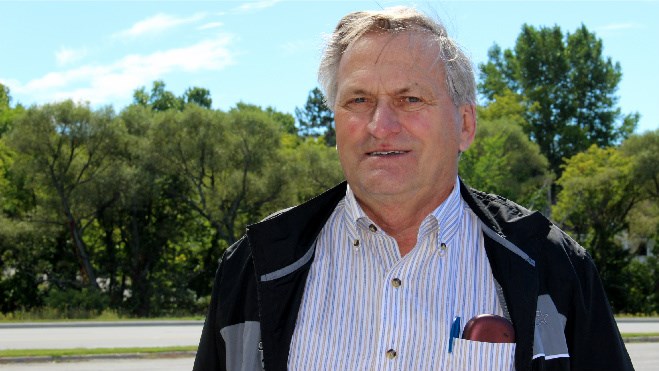 Mike Boudreau, president of the Ontario Outdoors Recreation Alliance, was in Sudbury in September to rally support for the group's fight with the Ministry of Natural Resources over access to remote lakes in Ontario. Photo by Darren MacDonald.
It's been decades since Mike Boudreau has been able to fish Little Missinaibi Lake, a 20-mile long water body that's part of the Chapleau game preserve.

“What a hot lake -- the best lake in Northern Ontario to catch pickerel,” said Boudreau, president of the Ontario Outdoors Recreation Alliance. “You'd catch them so fast, you'd feel guilty to keep fishing because you already got your limit.”

But in 1997, the province began Lands for Life process, with an eye on completing Ontario's parks system on Crown land, protecting certain areas, and ensuring resource-based industries would know what to expect. It became law in 1999 as the Living Legacy Land Use Strategy, a plan for protecting Crown land and water, which takes up 87 per cent of all land in Ontario. It covered more than 39 million hectares of land and water, or about 45 per cent of the entire province.

That's when Boudreau, himself a long-time bear outfitter, began to get concerned – and when he was barred from accessing Missinaibi.

“We got removed from that, and that made me realize, whoa, enough is enough,” Boudreau said recently, sitting inside the Steelworkers Hall on Brady Street. “Our concern was 180 lakes that were closed to us, the public, in Ontario ... That's when I became a radical.”

Boudreau and dozens of OntORA supporters met in Sudbury last month to rally support for court cases members are facing for violating the policy, as well as to raise funds for a lawsuit.

Boudreau was a founding member of NORA, which formed in 2002, followed by OntORA in 2008. Their membership began to swell as more groups across the province begin to realize the impact of the remote lake designation, he said. Dozens of people turned out for the Sudbury meeting, he said, and the group boats about 1,000 members in total.

Ontarians can still access lakes designated as remote, but only on foot – you can't use an ATV or any other motor vehicle to follow trapper trails to the lake, he said. Boudreau doesn't have an issue with helping outfitters, but can't understand why everyone else has to suffer.

“We want to share our lakes with them, we really believe in the free enterprise system,” he said. “Lands for Life, we agree with that ... But when we found out us there would be 2,000 lakes designated remote only, that's when we put up our dukes.

“Really, we only have one enemy -- we have the MNR. We cannot agree to have our lakes privatized.”

The group has sent petitions and questions to politicians in government, with no real response, he said. So now the group is raising $100,000 for a legal fund so its lawyers, Bay Street firm Aird and Berlis, can take the fight to court.

Boudreau hoped it would be a simple matter of each member giving $100. But after three years, they're only about halfway to their goal. He thinks there's a couple of reasons why.

Equally as troubling, he said, many members doubt they can win. Their lawyers change $350 an hour, and because the province has much deeper pockets, it can keep delaying court proceedings until OntORA's money is gone.

“They can play that game until you're blue in the face,” he said.

But Boudreau says they will persist, because the province is unfairly giving access to one group while excluding everyone else.

“We're doing this for future generations of Ontario – our kids and our grand kids,” he said. “Because they won't be able to access those areas.”

Membership in OntORA is $20. For more information, go to ontora.ca. For a look at Ontario's latest land use policies, go to www.mnr.gov.on.ca/stdprodconsume/groups/lr/@mnr/@lueps/documents/document/stdu_138092.pdf