High cost of mining a challenge in Far North

The high cost of doing business in Canada, especially in the Far North, is the biggest challenge the mining sector faces nationally, said Pierre Gratton, president and CEO of the Mining Association of Canada.
0
Sep 11, 2014 4:47 PM By: Jonathan Migneault 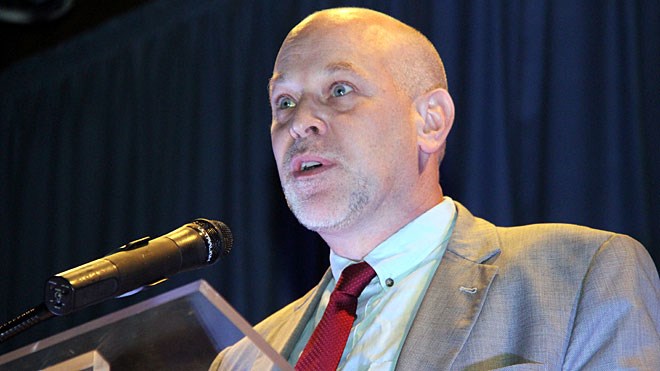 Pierre Gratton, the CEO of the Mining Association of Canada, said government needs to help address the high cost of operating mines in northern regions of Canada. Photo by Jonathan Migneault.
The high cost of doing business in Canada, especially in the Far North, is the biggest challenge the mining sector faces nationally, said Pierre Gratton, president and CEO of the Mining Association of Canada.

Gratton, who was the keynote speaker at a Chamber of Commerce event for the North America Mining Expo in Sudbury on Sept. 9, said according to Mining Association of Canada research, it can cost up to two and a half times as much to build a remote mine there, than a mine near a populated urban centre in the south.

“The fact is, while a vast country rich in resources, Canada has lost ground,” Gratton said. “We were a top-five producer of 14 major minerals in 2007, but today (Canada is on top) of only 10."

What's more, mineral reserves for most commodities have been plummeting since the 1980s, he said.

Building infrastructure in those regions, which often benefits remote First Nations by connecting them to transportation routes and electrical grids, constitutes a public good, Gratton said.

And providing a public good, he added, is primarily the responsibility of government.
“Should the mining company be paying for all of that, or should there be a partnership?” he asked.

Social licence, or how mining companies exercise corporate social responsibility when they dig minerals out of the ground, is another important challenge in Canada, Gratton added.

In his speech, he also addressed the Mount Polley tailings pond breach in B.C. that sent millions of cubic metres of waste into waterways on Aug. 4.

For the most part, he said, the mining sector has done a good job at managing the environment and working closely with local communities to cause the least harm possible.

He said the Mount Polley breach should hold the mining sector to account. Once more is known about the causes of the breach, the environmental disaster will serve as a lesson for future mines, he said.

“We need to continue to remember that the industry has a long track record of safe operation,” he said. “We know that mining is critical. We can't live without it in a modern way.”

“I don't know of any mining company today developing a new project in Canada that is not actively building, or trying to build strong relationships with local Aboriginal groups,” Gratton said.

Hans Matthews, president of the Canadian Aboriginal Minerals Association, spoke before Gratton, and said the mining sector has improved its involvement with Aboriginal groups immensely since he founded the organization in 1991.

Matthews bragged the mining sector has made more strides to reach out to Aboriginal communities than has the oil and gas sector.

In another keynote address, organized by Laurentian University's Goodman School of Mines on Sept. 10, Paul Rollinson, the CEO of Kinross Gold, addressed the issue of social licence from a global perspective.

The company operates nine gold mines around the world, ranging from the extremes of the Sahara desert, to the extreme cold of northeastern Russia.

Rollinson said community support is critical everywhere they operate in the world.

In Mauritania, when Kinross operates its Tasiast Mine in the Sahara, the company works with the nomadic Bedouin communities on a number of initiatives.

At the company's Fort Knox mine, in Alaska, Kinross undertook an extensive environmental rehabilitation program to restore wetlands that had been destroyed by previous mines in the region.