After weeks of waiting, HighLife owner Anton Lucic says he relieved
May 21, 2019 6:00 PM By: Darren MacDonald 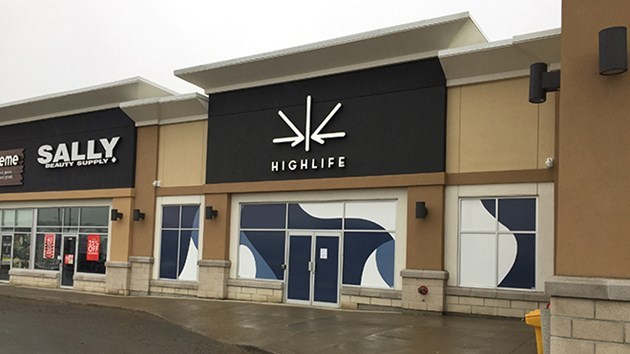 By this time next week, Greater Sudbury will have two cannabis stores, and the owner of the HighLife store on Marcus Drive couldn't be happier.

“I'm super happy,” Anton Lucic said Friday. "And I'm relieved, I guess. But more than anything, I'm really excited to get going."

Lucic was one of two lottery winners picked to open the stores allocated for Northern Ontario, which has two of the 25 stores the province is allowing to open. Both Lucic and the other winner, Saturnus Partners, chose to open in Sudbury.

The stores were allowed to open April 1, as long as their paperwork was completed and approved by the province. But most stores were delayed, and Saturnus opened their Canna Cabana outlet on Long Lake Road April 20.

But Lucic was among three lottery winners that were still waiting for provincial approval as the calendar turned to May.  He finally received the green light May 15, with only a store in Oshawa still waiting for approval.

"I've never felt this much relief in my life," he said, of getting the good news.

Lucic said he hasn't found out why it took so long for the Alcohol and Gaming Commission of Ontario to process his application.

"Whenever I called looking for an update, all they would say is the file is under review,” he said. “That's it ... But (the AGCO) is going to do a final inspection and then the doors open Friday (May 24) at 9 a.m."

He has placed his order for product with the Ontario Cannabis Store ahead of the grand opening, which will feature displays outside the store and a DJ playing “good, energizing music," Lucic said.

He has hired more than 40 people to staff the store, which will operate from 9 a.m.-11 p.m. seven days a week. Discounts on some merchandise (likely not the marijuana because of government pricing restrictions) will be available to people who sign on to their customer list.

"We'll have to work out the details of how that will work," Lucic said.

He'll be in town early next week as they ramp up for the final inspection and opening day. They expect to have about 80 different strains of marijuana to choose from, and the store's 'budtenders' will be on hand to answer questions and help customers find what they're looking for.

The doors will finally open at 9 a.m. this coming Friday with a bit of a bang. Highlife is offering a 10-per-cent-off sale all weekend long, and some of Canada's top cannabis producers are expected to be on hand to answer questions.

Those waiting in line can take advantage of a food truck with live DJs on hand to provide the music.

Sudbury MPP Jamie West will be there to cut the ribbon.

The store will operate seven days a week from 9 a.m. to 11 p.m. Age restrictions will be vigorously enforced and anyone under age 30 should expect to be asked for ID.

Rescuers recall the search for their friend, neighbour in Lake Wanapitei
Jul 12, 2020 12:19 PM

Overcast conditions drift into Sunday
Jul 12, 2020 8:00 AM
Comments
We welcome your feedback and encourage you to share your thoughts. We ask that you be respectful of others and their points of view, refrain from personal attacks and stay on topic. To learn about our commenting policies and how we moderate, please read our Community Guidelines.