Five years later, the cost of renovations has surpassed the $1-million mark, and there is still plenty of work to be done. But tenants have already moved in to the completed first- and second-floor spaces, and there have been more inquiries.
0
Apr 18, 2014 2:40 PM By: Lindsay Kelly - Northern Ontario Business 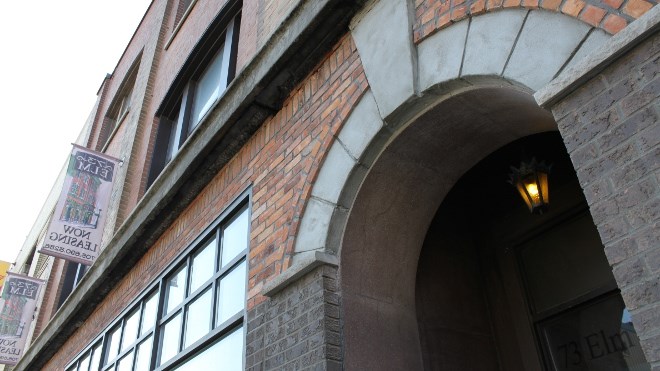 Renovations of the Muirhead’s building in downtown Sudbury will top $2 million when the work is complete. Photo by Lindsay Kelly.
Five years later, the cost of renovations has surpassed the $1-million mark, and there is still plenty of work to be done. But tenants have already moved in to the completed first- and second-floor spaces, and there have been more inquiries. Thompson couldn’t be happier to see life return to the century-old building.

“I grew up in Montreal and they have a value there where they value their buildings and they don’t tend to tear them down; they just keep them even if they’re raw,” Thompson said. “When I was in real estate I couldn’t understand why beautiful buildings were being torn down, so when this one came up it was like the last straw downtown.”

The three-storey building was constructed by some of the city’s first entrepreneurs: Dan Baikie, a bookseller; Dr. William Mulligan, a doctor with the Hudson Bay Company; and J.S. Gill, a jeweller who also issued marriage licences and served as Sudbury’s mayor in the 1920s.

Though the building has had many incarnations over the years, Thompson is repurposing it as work and live-work spaces. Engineering firm Worley-Parsons takes up most of the first floor, which features high ceilings and open work space, while marketing firm Fuel Multimedia leases the space next door.

Being centrally located is ideal for owner Jeff MacIntyre, who has made his home downtown for 18 years and now lives in the apartment behind his office.

“Being streetfront on Elm has been huge; the visibility is unreal,” he said. “Lots of cars going by, lots of pedestrian traffic going by. We have good conversations with people; everybody knows who we are now.”

Since relocating from his previous space on Durham Street two and a half years ago, his business has grown from a few clients to roughly 400, located in Sudbury, southern Ontario and stretching into the U.S.

Being downtown near his clients — many of whom are in the mining industry — where he can pop into their office or meet them over coffee, is essential to doing business, he said.

“That physical connection still matters and there’s only so much you can get done by email,” MacIntyre said. “Having that cluster of people makes a big difference.”

Renovations have been neither easy nor cheap. The entire stairwell had to be rebuilt to bring it up to current building code standards, and an elevator is being installed to allow for accessibility. But uncovering treasures through the process has been rewarding, Thompson said.

Ripping out lath and plaster exposed classic red brick. By taking the building down to its original elements, Thompson is aiming for the studio-style lofts sought after in larger urban centres like Toronto and Montreal.

Their second-floor office is the ideal space the owners of Studio123 were looking for when they started their new design firm earlier this year.

Christian Pelletier and his partners had repeatedly faced disappointment after being shown spaces with drop ceilings and carpet. He said he fell in love immediately with the Muirhead’s space.

“I’d rather have a dingy place that needs a lot of love, and it’s perfect,” he said.

The TLC put into the office has paid off. Modern touches complement traditional features like exposed brick, hardwood floors and arched windows that let in lots of natural light.

Locally sourced materials enhance the space, including lockers from Churchill Public School, a blackboard from McLeod Public School and the building’s own old wooden doors (repurposed as homemade desks).

“We wanted an environment that’s super stimulating,” Pelletier said. “I want to be here at 8:30 a.m. on Monday morning and be excited about being here, and create the work space I always wanted.”

“What happens when you do these projects is you have to invest your own capital as an owner — there’s no funding available — so it’s costly,” Thompson said. “Once you get tenants in place, then you can borrow from the bank and that helps you do the next phase. You could do the whole thing at once, but it would be costly.”

Thompson believes incentives from the city would go a long way to prompt more renovation of older downtown buildings. Parking remains an issue as well; commercial spaces are slower to be leased because business owners need parking spaces for employees.

Slowly but surely, however, rejuvenation is starting, and Thompson said she’s more optimistic now than she’s been in the last 10 years. The school of architecture is under construction, Peddler’s Pub is undergoing a patio pilot, and Vancouver yoga-wear retailer Lululemon announced in April it was opening a pop-up shop on Cedar Street. There is also news that another retail tenant is on the hunt for 5,000 square feet of space in the downtown.

“If retail starts coming back, that’s huge,” Thompson said. “People won’t mind parking a few blocks away if there are lots of things to do when they’re down there.”

One of her goals of undertaking the renovation project was to encourage others to do the same so that no more buildings were unnecessarily demolished.

“There’s a lot of old architecture lurking in these buildings downtown,” Thompson said. “It’s kind of fun to uncover that.”