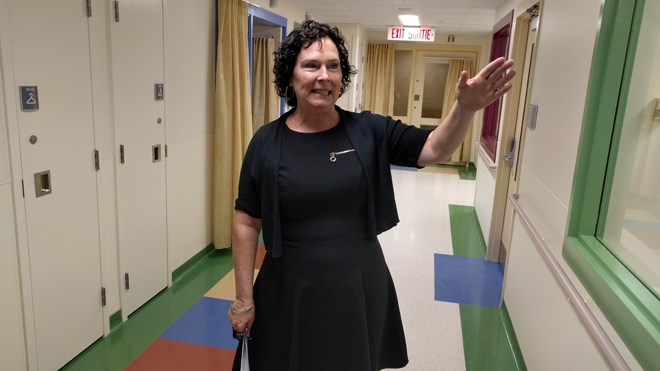 Health Sciences North has a new inpatient unit for its Child and Adolescent Mental Health Program that provides more space and privacy for children under the age of 18 who need to be admitted to the hospital for mental health services.

The hospital's inpatient mental health unit for youths was previously located at 680 Kirkwood Drive, about a five-minute drive from the Ramsey Lake Medical Centre.

Dr. Peter Ajueze, a psychiatrist with the Child and Adolescent Mental Health Program, said that space was not ideal for children and teens.

Young patients had to go through the adult psychiatric unit to get to their rooms, which was both intimidating and inappropriate for confidentiality reasons, said Ajueze.

The new unit occupies its own space on the fifth floor of the Ramsey Lake Health Centre.

It is larger than the previous location and includes bigger bedrooms, a larger dining room, lounge, family room and private therapy areas. It also has expanded work areas for clinical staff, better laundry and linen facilities and more storage space.

Mary Jago, the Child and Adolescent Mental Health Program's clinical manager, said it was a massive undertaking for the hospital to create the new space.

While the Kirkwood site had four beds – and could expand to six beds in emergencies – the new space will have six permanent beds, with the potential for a seventh.

In the past year the unit saw almost 400 children and teens admitted.

Ajueze said there were sometimes as many as five youths waiting at the hospitals emergency department to be admitted in the unit. Those waits could be as long as 90 hours.

In the past year, the average length of stay in the unit has been 4.5 days.

The goal, said Ajueze, is to help children and teens in a time of crisis, and eventually refer them to mental health services in the community for their continued recovery.

Since 2006, rates of emergency department visits increased by 45 per cent and rates of inpatient hospitalizations increased by 37 per cent for five- to 24-year-olds with a mental health disorder.