Hundreds of teachers protest in downtown

Hundreds of teachers and education workers gathered in front of Sudbury MPP Rick Bartolucci's office on Cedar Street Sept. 28 to deliver a message to the provincial government.
Sep 28, 2012 6:55 PM By: Heidi Ulrichsen 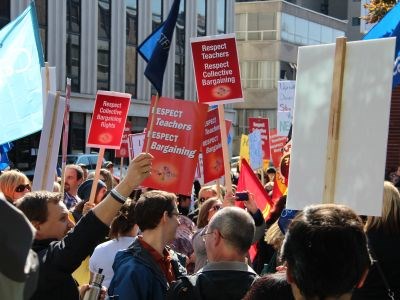 Hundreds of teachers and education workers gathered in front of Sudbury MPP Rick Bartolucci's office on Cedar Street Sept. 28 to deliver a message to the provincial government.

They're upset by Bill 115, a piece of legislation passed earlier this month which imposes many of their contract terms, including a two-year wage freeze.

The protesters, which also included members of several unions not related to education, such as Steelworkers Local 6500, chanted slogans such as “kill Bill 115” and “hey hey, ho ho, Bartolucci has to go.”

Barb Blasutti, president of the Rainbow local of the Elementary Teachers' Federation of Ontario, which represents elementary teachers with the Rainbow District School Board, said her members are angry about what the province has done, which she said amounts to an attack on democracy.

“We want to draw public attention and awareness to what's really at stake with this legislation,” he said. “What this legislation has done is it has taken away teachers' and educational workers' right to bargain with their employer. The Ontario Labour Relations Act clearly states we have the ability to negotiate. Our constitutional rights uphold that as well.”

Teachers are well aware of the province's financial realities, and were never planning to ask for pay raises or improvements to benefits, Blasutti said.

Still, the government pre-empted the bargaining process, and they're planning to do so for many other public sector workers, too, she said.

James Clyke, District 3 president of the Ontario Secondary School Teachers' Federation (OSSTF), which represents secondary teachers with the Rainbow board, said he and Blasutti tried to meet with Bartolucci before the protest, but were told he wasn't there.

He said the protest sends a very clear message that his members think Bill 115 is “draconian.”

“You can tell from the demonstration today that there's a number of people in the education sector that are very, very disappointed with it,” Clyke said.

A number of the protesters came armed with creative homemade signs.

“I feel that my rights have been just destroyed and that I am a non-person,” she said. “I'm really mourning my constitutional rights, which have been abdicated by this Bill 115. I do not have the right to negotiate collectively.”

Lefebvre said she think it's important for her members to speak out.

“When you have no rights, you have no voice,” she said. “I think this is one way for us to have our voices heard. We want our rights back.”