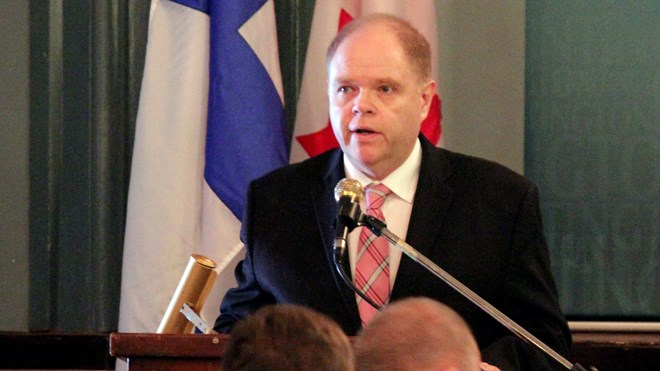 Dr. Kevin McCormick, President and Vice-Chancellor of Huntington University, is heading to Japan to present a keynote address at an international conference being held July 8 - 12 at the University of Miyazaki. (File photo)

Dr. Kevin McCormick, President and Vice-Chancellor of Huntington University, is heading to Japan to present a keynote address at an international conference being held July 8 - 12 at the University of Miyazaki.

As a sought after speaker, McCormick is regularly invited to present at national and international conferences and institutions of higher learning in countries such as Sri Lanka, Vietnam, India and Northern Ireland.

His keynote address at the 13th International Conference, will focus on citizenship and humanitarian issues, including refugees and displaced people.

Over the past 20 years, Dr. McCormick has provided leadership and spearheaded various awareness and fundraising campaigns to establish relief programs across the globe in locations such as Thailand, India, Myanmar, Laos and various African nations.

In 2009 thanks to the global reputation he had developed, Dr. McCormick was invited to attend the United Nations International Refugee Day celebrations on June 20 in New York City, as an honoured guest, and share his model of international volunteerism and mentorship.

Over the years, he has also been recognized by numerous governments and human rights agencies, and has worked with international aid agencies such as UNICEF and the UN Refugee Agency.

While in Japan, Dr. McCormick will also present Maple Leaf Awards. The award program, which is personally funded by Dr. McCormick, anonymously recognizes scholars from developing countries for their work in the area of social and economic development.

The Maple Leaf Award Program is an international initiative that financially supports individuals from developing countries to ensure that they can attend international conferences. The prize funding also supports the dissemination of the recipient’s research into the global community for scholars.

Since its inception, the program has supported individuals from such countries as Laos, Cambodia, Sri Lanka and Myanmar-Burma.

“I am truly honoured to be involved with such an inspirational community of international scholars, global refugee rights groups and social justice advocates,” said McCormick.

“Having worked for decades raising awareness for the safety and security of refugees and internally displaced peoples around the globe I remain humbled by the efforts of those scholars presenting, and the organizations that are supporting international efforts for social development and justice. The Maple Leaf Award Program established years ago is a powerful way to ensure that human rights advocates, international social justice groups and academics share ideas and strategies in a safe and secure community.”