Huntington U. president presented with one of Finland's highest honours

McCormick presented with the Knight, First Class, of the Order of the White Rose of Finland
Feb 21, 2017 8:29 PM By: Matt Durnan 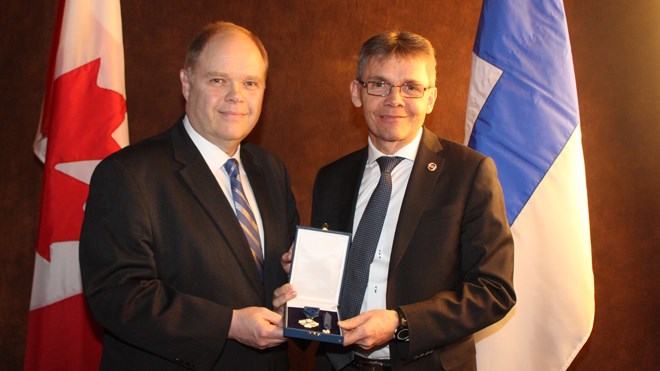 Huntington University president and vice-chancellor Kevin McCormick was presented with the Knight, First Class, of the Order of the White Rose of Finland on Feb. 21 by Vesa Lehtonen, ambassador of Finland to Canada. Photo: Matt Durnan.

Huntington University president and vice-chancellor Kevin McCormick was presented with the Knight, First Class, of the Order of the White Rose of Finland on Feb. 21.

A small, private ceremony was held at Alexandria's on Tuesday evening, where McCormick was presented with the Order of the White Rose of Finland by Vesa Lehtonen, ambassador of Finland to Canada.

"On behalf of the president of the Republic of Finland, I have the great honour to decorate Dr. Kevin McCormick in recognition of his outstanding leadership with the Canadian Finnish Institute," said Lehtonen.

"In a very short time, the Canadian Finnish Institute has brought together many leaders from the Finnish community and has made noticeable gains in highlighting the contributions of Finnish people to Canada. As a recipient of this significant and prestigious award, Dr. McCormick represents an elite group of individuals recognized for their exceptional dedication to the advancement of Finland."

McCormick and Lehtonen were joined by Hannu Piironen, Honourary Consul to Finland, who shared his delight in seeing McCormick being recognized.

"I am very proud to see Dr. McCormick recognized by Finland and named a Knight, First Class, of the Order of the White Rose of Finland - one of three official orders in that country," said Piironen.

"His vision for the Canadian Finnish Institute, the only one of its kind in this country, makes him a most deserving recipient of this honour."

McCormick holds other national and international honours and awards from Canada, Thailand, the United Kingdom, United States, and Italy.

Despite a long list of accolades and awards, McCormick was very humble after accepting his most recent honour.

"Sudbury and Northern Ontario has a very rich history, well over a century of the contributions of Finnish people to our country, to our culture, our economy and our way of life," said McCormick.

"As Finland celebrates its 100th year of independence and Canada celebrates its 150th, it's really amazing to have them celebrated at the same time. I'm a proud Canadian and a global person and I see the benefits that everyone brings, and to even be considered it's a humbling experience, but I think it's really a testament to the Finnish people reaching out beyond their borders and to Canadians always wanting to work with others."

Another case of COVID-19 confirmed by Sudbury health unit
Aug 5, 2020 3:37 PM
Comments
We welcome your feedback and encourage you to share your thoughts. We ask that you be respectful of others and their points of view, refrain from personal attacks and stay on topic. To learn about our commenting policies and how we moderate, please read our Community Guidelines.