Flag flying at Tom Davies Square as ceremony honours the 331 trans people killed across the world this year
Nov 20, 2019 6:00 PM By: Arron Pickard 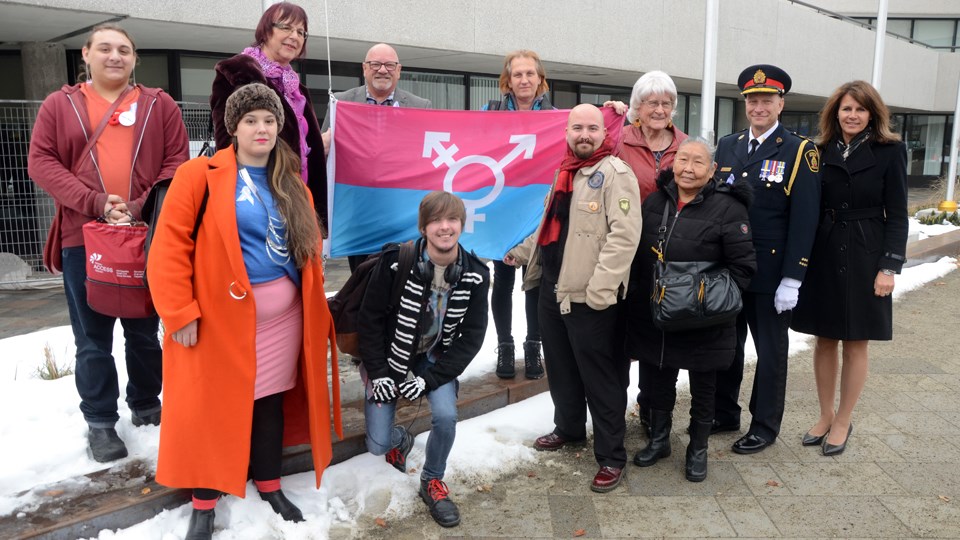 High school should never be a place where death threats, assault and ridicule are common place.

But for Biara Gould, it was a regular occurrence. Notes with death threats were put in her locker, she was tripped down flights of stairs, even assaulted in the locker room — all because she started to transition from male to female.

Gould couldn't turn to her teachers or the school administration. When she did, she was told to “get a thicker skin.” When she was assaulted, she was given excuses as to why the school couldn't do anything about it.

She said her teachers refused to call her by her preferred name (Biara) or pronouns, and would sometimes even emphasize her birth name.

“It was hurtful to feel that,” said Gould, now a 20-year-old self-proclaimed “gamer girl” (it was a video game that inspired her preferred name). “School was a place I was supposed to be able to feel safe, but here I was being harassed and attacked. No one wanted to help me. I felt so alone.”

Then when the schools' Gay-Straight Alliance shut down, she said she felt even more alone, because she had no where to go where there were like-minded individuals.

“It was very depressing and difficult. I struggled with depression for a long time. Every morning, I'd wake up and think of some excuse not go to school. I had thoughts of suicide, because there were many times I'd think to myself, 'F--k this, I can't take it any more.'”

Gould shared her story on Nov. 20, which marked the Trans Day of Remembrance. A ceremony was held at Tom Davies Square with a proclamation and flag-raising.

While her life in high school was a “nightmare,” she said in a strange way, she's glad it happened.

“It has shaped me to who I am today,” Gould said. "Life is much better these days. I have the support of my mother, she's absolutely wonderful. I'm working with TG Innerselves. I attend the transgender social support group each week, and I'm coming into my own.”

Gould said she is brave enough to share her story in hopes it will prevent similar things happening to other people.

Vincent Bolt is the education manager at TG Innerselves. He said Trans Remembrance Day is important because there are still trans people across the globe experiencing violence and harassment, who are being murdered just for being who they are. It's important to keep that discussion at the forefront to show action is needed.

“We need allies in the community to step forward and put in those changes that affect trans people,” Bolt said.

There has been an increase in murders in the US since 2015. Globally, 331 transgender people have been murdered in the past year, he said. Also, the rights of trans people are being scaled back in some parts of the world.

In Canada, things are moving forward, Bolt said. For example, the federal ban on conversion therapy, as well as the amendments to the Canadian Human Rights Act to protect gender identity and gender expression.

“What we are seeing here in Canada is an increase in violence against people because of their sexual orientation,” Bolt said. “That is a scary picture. That's why it's important that we stand together in solidarity of all of our identities.”

In Greater Sudbury, there are many community leaders who support transgendered people.

“There are a lot of people who take our concerns seriously, but we'd like to see more support for groups or organizations that run programming. We can only do as much as our funding will allow. We are starting to see a shift in the community. It's a lot safer in parts of the city than it used to be. There is a lot more visibility and a lot more understanding.”

We the Bury bottle drive will support families of children with cancer
Jul 2, 2020 5:00 PM

Sudbury Catholic chair Michael Bellmore elected new VP of OCSTA
Jul 2, 2020 4:00 PM
Comments
We welcome your feedback and encourage you to share your thoughts. We ask that you be respectful of others and their points of view, refrain from personal attacks and stay on topic. To learn about our commenting policies and how we moderate, please read our Community Guidelines.