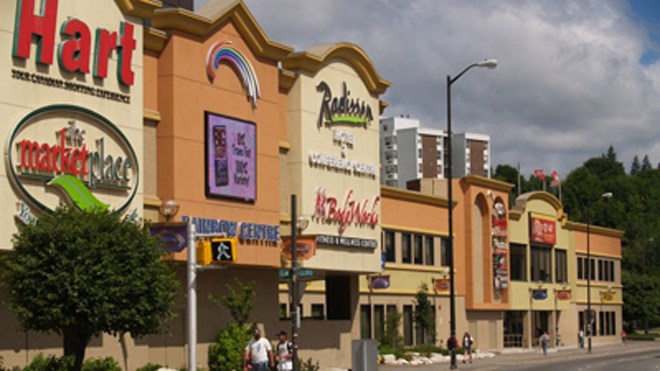 It's business as usual at the Rainbow Centre after some businesses located inside the mall were forced to close their doors on Monday as crews worked to repair a water main break. (File)

It's business as usual at the Rainbow Centre after some businesses located inside the mall were forced to close their doors on Monday as crews worked to repair a water main break.

The break, which took place over the weekend in the parking lot at Durham and Elm Streets, caused water to seep into the Imagine Cinemas Downtown Movie Lounge Sudbury.

"That is the only water that entered the building," Vista Hospitality project manager Robert Green said.

"We got the water out of there and it doesn't appear to have affected any infrastructure."

Green said the water was limited to the low-lying area near the front of the theatre below the screens, which is mainly concrete flooring.

There may be some minor drywall repair, he said, but none of the equipment appears to be damaged.

To repair the water main break, the water supply had to be shut off on the west side of the mall, which is why shops that require water supply to operate, such as Smoke's Poutinerie and Country Style in the Marketplace, were closed on Monday. The water was turned back on Monday evening and those shops were able to open their doors Tuesday morning.

The theatre was the only establishment in the mall that received water damage, but re-opened on Tuesday. According to a post on the Imagine Cinemas Facebook page, four auditoriums are up and running while clean-up continues in theatres two and four.

Ontario mulls collection of race-based COVID-19 data; some argue it's essential
Jun 3, 2020 10:00 PM
Comments
We welcome your feedback and encourage you to share your thoughts. We ask that you be respectful of others and their points of view, refrain from personal attacks and stay on topic. To learn about our commenting policies and how we moderate, please read our Community Guidelines.