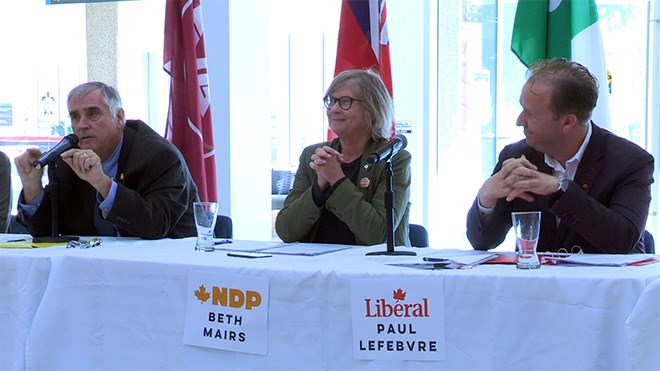 Another day, another debate.

A little more than 12 hours after they finished going toe-to-toe at the Greater Sudbury Chamber of Commerce debate, candidates in the Sudbury riding got together again, this time at Laurentian University.

“I am a driven animal rights activist,” Lalonde said, who said she was heavily involved in the local last straw movement, which lobbied local businesses to stop using single-use plastic straws, and she is campaigning to promote a zero-carbon lifestyle.

Lalonde said her party's “main focus is to create a government that will protect animals, empower people and preserve the environment.

“I believe all living organisms deserve a right to keep on existing and that humans are not superior to animals,” she said.

After the introductions, candidates were asked what they would do to end boil water advisories in First Nations, where, they were told, 73 per of  communities have either barely acceptable or sub-standard water.

“That's an embarrassing situation for Canada,” he said. “It's unconscionable. Water is a fundamental right.”

Mairs said racism and colonialism plays a role in the continuing crisis because too many people don't see it as a crisis because of the way they view First Nations.

“We have been conditioned to see First Nations people as not worthy,” she said, adding that some “settlers” like her “have had that shroud ripped aside.

“It's harder and harder to feel truly proud to be a Canadian when we allow people, First Nations, to live in such deplorable conditions,” Mairs said. “Cleaning up the water … hasn't been done because it hasn't been seen as a priority. Our current government has made different choices.”

They spent $4.5 billion on buying a pipeline instead, Mairs said.

“Over 80 have been lifted,” he said. “Sometimes the perception is, you just have to walk in and get it done.”

Liberals are determined to provide long-term solutions, ensuring they work with communities to locate water works and train the people required to properly maintain it. That takes time, he said, but they have promised it would complete by 2021

“We're actually ahead of the curve,” he said. “There's about 50 left and they are all in the process of being lifted.”

Responding to a question about climate change, St. Amand repeated his party's policy that taxing carbon is a mistake.

“We feel the carbon tax has a very negative effect on our economy,” he said.

The Tories want to focus on research and find ways of reducing carbon, not eliminating the use of fossil fuels.

“We can made oil part of the solution.”

Mairs said a big reason some people are afraid of climate change solutions is fear about how much it will cost them. She said Lefebvre was able to “drop” $40,000-$50,000 just before the election to buy a zero emissions car.

“In Sudbury, half of the people are living on less than $50,000,” she said. “The NDP wants to make environmental choices accessible to everyone.”

When questioned about immigration, St. Amand said his party supports immigration, but the refugee system needs to be improved.

“The problem we have now” is people trying to get in from other countries, he said, who are shopping around to decide which country they want to make a claim in.

“We have legitimate refugees who need our help,” St. Amand said. “But we don't need to accept anyone who wants to come over because they have been shopping around for the best country.”

Lefebvre said Canada stepped up when the Syrian refugee crisis hit, and Sudbury welcomed them to the city. They have since made strides, with one of the children now attending Laurentian.

“I see with my own eyes every day how they are thriving in Sudbury,” he said.

Paterson said, despite their reputation, the PPC supports immigration, but wants to drastically cut the number we accept from 350,000 a year to 150,000 and change the system to focus on economic migrants who can contribute right away.

“We're looking at accepting fewer refugees,” he said, and is looking at eliminating family reunifications, including for parents and grandparents, and ending what he called “birth tourism.”

“PPC is not anti-immigration, we just want a more controlled flow.”

Mairs said more and more working class people in Canada are suffering economically, and it's this anxiety that plays into a view there is someone to blame – in this case, new Canadians. She wondered whether promises to cut immigration levels is an attempt to capitalize on this anger.

“They feel left out of the economy and they are disenfranchised,” she said. “This breeds resentment towards others, including immigrants.”

HSN CEO touts Sudbury’s country-leading COVID-19 testing efforts
May 27, 2020 5:51 PM
Comments
We welcome your feedback and encourage you to share your thoughts. We ask that you be respectful of others and their points of view, refrain from personal attacks and stay on topic. To learn about our commenting policies and how we moderate, please read our Community Guidelines.