Organization created a safe driving pledge for parents and their children
Jun 5, 2016 5:00 PM By: Jonathan Migneault 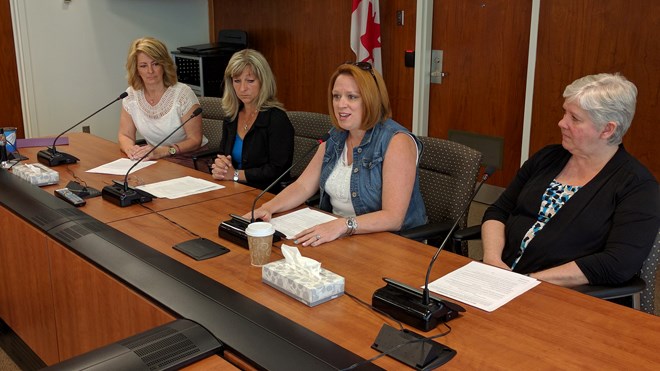 From left, Corrie Lamoureux, the mother of Jazmine Houle; Lisa Jelley, the mother of Caitlin Jelley; Leanne Lavoie, a volunteer with the Human League Association; and Jocelyne Philippe, the mother of Steven Philippe, spoke with media Friday about the new Impact 6/21 Foundation to promote a safe driving agreement. In the agreement parents pledge not to drive while impaired, and their children pledge to do whatever is needed to ensure they keep that promise. Photo by Jonathan Migneault.

A local organization dedicated to fighting impaired driving has come up with a new strategy after drunk  driving continues to be a problem in the northeast and across Ontario.

The Impact 6/21 Foundation was formed in 2011 to honour the memories of Jazmine Houle, 15, Steven Phillipe, 16, and Caitlin Jelley, 15, who were killed by 26-year-old Nicholas Piovesan on June 21, 2009, when he took control of his vehicle while under the influence of alcohol.

The members of Impact 6/21, which includes the three teens' mothers, have concluded that simply reasoning with adults not to drink and drive has not worked.

The group has created a safe driving agreement for parents and their children in which the parent pledges not to drink and drive, and their child pledges to take any action necessary, including calling 911 if necessary, to stop their parent from getting behind the wheel while intoxicated.

Impact 6/21 said the pledge does not necessarily have to be between a parent and their child, but can be between any two people, including friends, siblings and partners.

Studies have shown that 85 per cent of impaired drivers were with family or friends before getting behind the wheel of their vehicle.

Impact 6/21 plans to distribute the agreement as widely as possible.

“Don't let anyone else wake up to news that a loved one was gone when you could have stopped it,” said Leanne Lavoie, a volunteer with the Human League Association, who has worked with Impact 6/21 on the agreement. “Sign the pledge today.”

On Sunday, June 19, Impact 6/21 will host the annual Memorial Walk in memory of Jazmine, Steven and Caitlin.

The walk will start at 8 p.m. outside the Valley East Lion’s Club in Hanmer, located at 4611 St. Joseph Street.

Check out these great business ideas from the winners of Cambrian’s Student Innovation Challenge
May 11, 2021 7:00 PM
Comments