Thunder Bay photographer Scott Chisholm is inviting people from Greater Sudbury and the surrounding area who have lost loved ones and friends to suicide to come forward, be photographed and share their story.
0
Apr 8, 2016 3:20 PM By: Jonathan Migneault 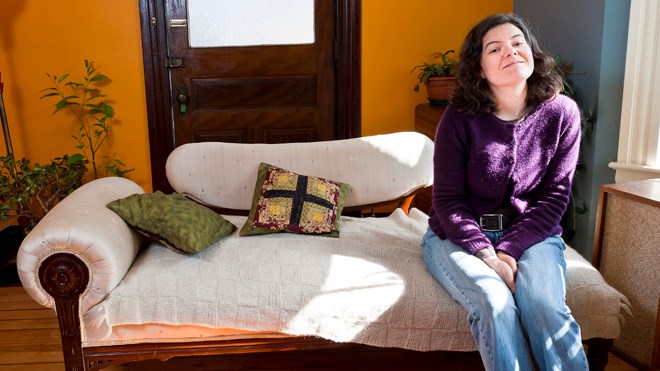 Jen MacDonald, from Halifax, lost her father to suicide in the 1980s. MacDonald volunteered to be photographed for a photography project – and upcoming book – called Collateral Damage, which tells the stories of Canadian families who have lost loved ones to suicide. Photo by Scott Chisholm.

Thunder Bay photographer Scott Chisholm is inviting people from Greater Sudbury and the surrounding area who have lost loved ones and friends to suicide to come forward, be photographed and share their story.

Chisholm, the founder of the Collateral Damage Project, will be in Sudbury from April 11 (Monday) to April 15 (Friday) to photograph subjects and help share their stories.

For the last six years, Chisholm has traveled around Canada to document the stories of families who have lost a loved one to suicide.

“It's the greatest trauma of my life, bar none,” he told NorthernLife.ca during a visit to Sudbury in February. “I could be in a bad car crash and it would still not exceed what I've been through.”

He said his photography project was more about his own recovery from his father's death.

“The truth is, I've been in search of one story, and that's my own,” Chisholm said. “And I've figured it out. Quite simply, it's about love.

“If we focus on my dad, it's grey and gloomy, and we can't do anything about it.”

His focus has instead been on telling the stories of survivors, who themselves are at a greater risk of suicide after they lose a loved one.

Chisholm is collaborating with the North East Suicide Prevention Network to bring the Collateral Damage Project to Greater Sudbury.

The North East Suicide Prevention Network is dedicated to reducing incidents of suicide and suicide behaviour. It does this through public education, awareness, training, information sharing, networking and other mediums. Members of the network represent service organizations as well as community members and survivors of suicide loss.

Although suicide deaths affect almost all age groups, those aged 40 to 59 had the highest rates.

Married people had a lower suicide rate than those who were single, divorced or widowed.

Research shows that mental illness is the most important risk factor for suicide; and that more than 90 per cent of people who die of suicide have a mental or addictive disorder.

To arrange an interview with Chisholm, to participate in the project, call him at 807-474-7565, or reach him by email at scott@leftbehindbysuicide.org.

You can learn more about the Collateral Damage Project online.

Ontario mulls collection of race-based COVID-19 data; some argue it's essential
Jun 3, 2020 10:00 PM
Comments
We welcome your feedback and encourage you to share your thoughts. We ask that you be respectful of others and their points of view, refrain from personal attacks and stay on topic. To learn about our commenting policies and how we moderate, please read our Community Guidelines.