In the age of unhealthy snacks, he wants to bring hummus to the people 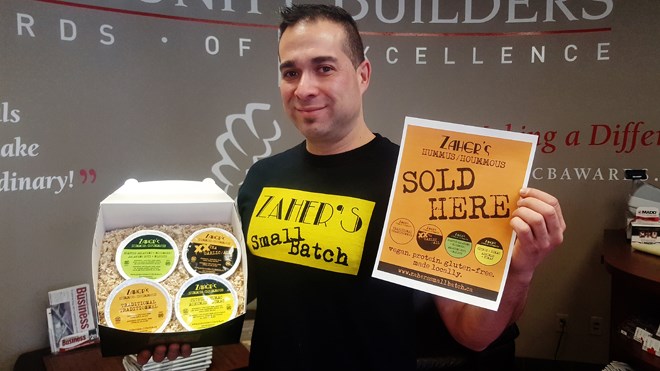 If he has his way, Sudbury's Deke Zaher will have his Nutrition Break and hummus products in arenas, vending machines and health food stores throughout Greater Sudbury.

Zaher, CEO and founder of Zaher's Small Batch, said he is seeing some positive reaction to his products. His hummus is now available through Paris Natural Foods, Smith's Market (both locations), and soon, it will be available as a dipping sauce at Frenchy's Pizza. In the near future, two organic vegan business set to open in Greater Sudbury will also be selling his homemade chickpea paste.

His hummus is made with a recipe he said was passed down through four generations of Zaher men, he told Sudbury.com. It dates back to the 1920s, in his great grandfather's restaurant in the city of Haifa, in what was then Palestine.

When he was a kid growing up in Sudbury, he would bring in his hummus for show and tell.

“I was the kid who brought the weird stuff to school,” he said. “I brought hummus for show and tell in Grade 1, and I was able to describe how it's a staple in my family.”

Zaher has taken his passion for his family's tradition, and is banking on the fact others will appreciate the fresh, homemade flavour as much as he does.

He has four flavours available right now: traditional hummus, XX garlic, citrus and sumac, as well as roasted jalapeno and wild blueberries. In the works are dill pickle and hummus ganouche, a hybrid chick pea and roasted egg plant dish. His goal, Zaher said, is to offer traditional and unique flavour combinations, so you don't expect to find any roasted red pepper hummus with his name on it.

“I take great pride in the flavours I'm coming out with,” he said. “There is no after taste, it's very flavourful and the texture is bang on. I'm taking this traditional method and putting a modern trend on it.”

His hummus is gluten free and vegan friendly. It's also nut free, he said.

“The support has been overwhelming,” he said. “Paris Natural Foods was the first to take me on. Right now, it's just important for me to get into people's fridges, let them get a taste of it, and that will keep them coming back.”

As for his Nutrition Break product — pre-made packages containing a portion of hummus, pita, fresh spiral-cut fruit or cheese curds and vegetables — Zaher's plan is to replace the traditional French fries and nachos available through arenas with his healthier option.

“It's a health facility, and these kids need proper fuel, but there isn't much like that available,” he said. “It's time to make that happen.”

Anyone interested in learning more about these products can visit zaherssmallbatch.com, email gmail@zahersenterprises.com or find him on Facebook.