Injuries after snow slides from flower shop roof on Regent 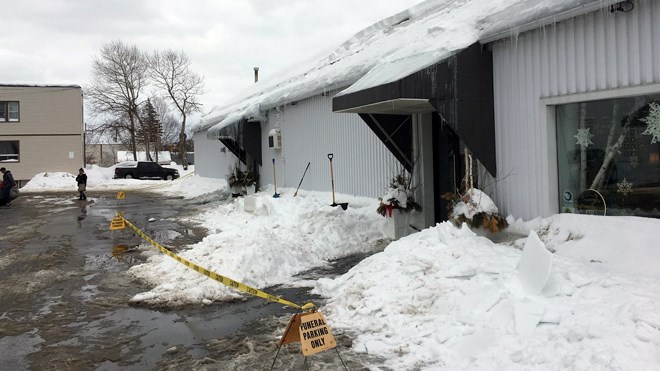 A load of snow slid off the roof of Lougheed Flowers on Regent Street this afternoon, sending at least one person to hospital. (Matt Durnan / Sudbury.com)

At least one person was taken to hospital with non-life threatening injuries after snow on the roof of a Sudbury business slid off the roof and into a parking lot.

The incident occurred shortly after 1 p.m. Friday at the Lougheed Flowers shop at 252 Regent Street.

Workers who were clearing some snow in the parking lot said a large pile of snow, enough to cover a car, fell off the roof and partially buried a car parked right next to the building. The building is a Quonset-style structure with a curved roof.

The car was parked close to a sign on the building that said “ Please … Funeral home patrons, park at your own risk. Thank you.”

The workers in the parking lot said one person who was near the car was taken to hospital with injuries he described as not serious. The worker did not specify whether the person was getting into or out of the car.

The workers cordoned off the parking area with yellow caution tape. They said a contractor had been called to remove the remaining quantity of snow from the roof of the building.

Sudbury business man creates alcohol-free hand sanitizer
Sep 23, 2020 8:00 PM
Comments
We welcome your feedback and encourage you to share your thoughts. We ask that you be respectful of others and their points of view, refrain from personal attacks and stay on topic. To learn about our commenting policies and how we moderate, please read our Community Guidelines.