Elizabeth May talks the state of our democracy, dealing with skeptics and how climate change became political
0
Aug 20, 2019 6:15 PM By: Darren MacDonald 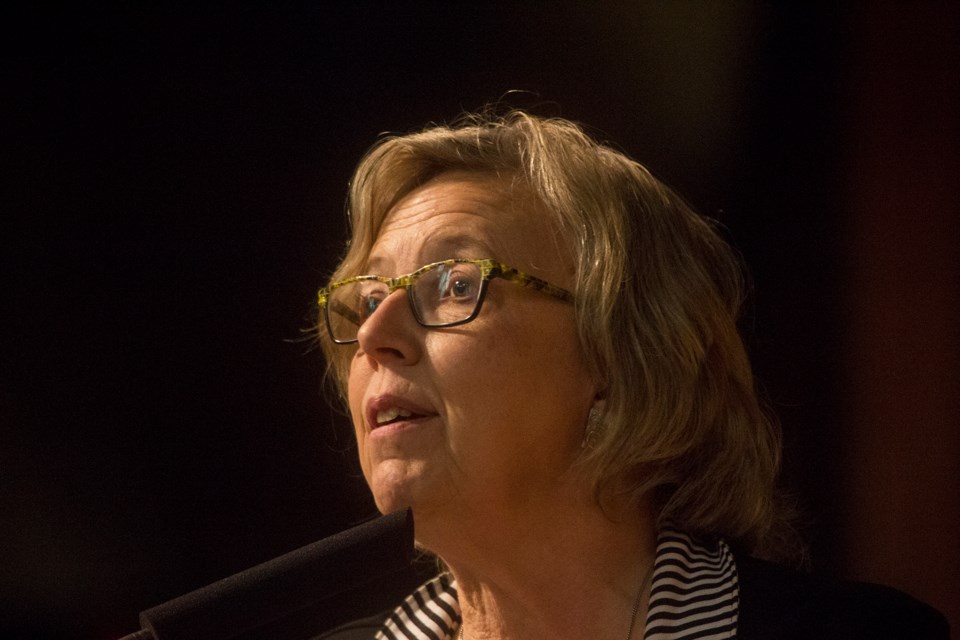 Green Party Leader Elizabeth May was in Greater Sudbury on Tuesday and sat down with Sudbury.com for an interview. (File)

There's something liberating about talking with politicians who don't exactly expect to sweep into power in the next election.

Not to say Elizabeth May, leader of the Green Party of Canada, isn't in the October federal election to win it. But even at 10.6 per cent in national opinion polls – a historic high – May has no illusions about governing after the Oct. 21 vote.

In Greater Sudbury on Tuesday, May came to our Elgin Street building for an interview – watch the full video below. In contrast with candidates and party leaders aiming to take power – who often treat media interviews as either a dance with the devil, or a sort of test to see how well they stick to party talking points – May was relaxed and talkative.

What has separated the Greens from Canada's traditional parties is their willingness to tell Canadians things they don't want to hear, and to resist the urge to demonize opponents, such as climate change deniers – a term she dislikes.

“I'm not comfortable with the word denier,” May said.

It's political because of its association with people who deny the Holocaust, she said, an unfair link. And it creates barriers between groups who should be talking with one another.

“I think if we're going to reach people, we need to reach everyone,” May said. “We really don't need to be dividing ourselves on this. We need to educate everyone and I think that with the information that's in front of us, there is no space for thinking we're not in real trouble.”

May says she can remember when the issue wasn't political, and says Margaret Thatcher, the former Conservative PM in Britain, former Tory PM Brian Mulroney and for U.S. President George Bush Sr. were among the early adopters of the need for action.

“The era where Canada was in the lead was when Brian Mulroney was prime minister and his ideological ally, Margaret Thatcher, was an early climate leader. She set up a climate research group within universities in the UK because she could see this is serious.”

Climate change skeptics often focus their attacks on the idea of probability – that the expected effects of climate change are probable, but not certain.

May said that is a misunderstanding of how the term is being used, and argued the 'probable' effects of climate change are within a certain range – bad, worse, catastrophic.

“The uncertainties are generally it could be worse than we think.”

While leaders of the big political parties all agree it's a real threat, she said none of them are willing to adopt policies that really take climate change seriously.

“Maybe it's smart politics to make a suicide pact globally and take humans off the planet, but I don't think it's morally responsible,” she said. “I think it's criminal. So we have to tell the truth about it and we have to have a plan and we have to say, people come on, we can get through this together.

“Right now, and we're in a dangerous place. But we can get through it, but not if we waste our time being divided.”

In terms of the October election, May said she's still upset that Prime Minister Justin Trudeau reneged on his promise for electoral reform, but says with so many parties running this time, a minority government may depend on the Greens or others to hold on to power.

“The weird thing about this election is ... we're going to have a Parliament that looks as though we got reform because we now have six political parties,” she said. “We could end up in a position where we can demand electoral reform as a condition for supporting a confidence vote, not that it would be the first issue we would raise. … But I want to be in that position, with more Greens elected.

“I think it will be very good for the country because we like working across party lines.”

When it comes to the toxic nature of politics in recent years, May said the Greens are being as non-partisan as a political party can be. They can raise the alarm about climate change without going low.

“We never do negative campaigning,” May said. “We don't attack the personalities or try to make fun of other party leaders. We do criticize where they go wrong and we do give credit when they get it right. So we have a different approach.”

News last week that Trudeau broke conflict of interest guidelines in the SNC-Lavalin scandal have so far not dented the Liberal standing in the polls. U.S. President Donald Trump does something nearly every day that would have ended a politician's career 10 years ago. What does May make of a political scene that has gone topsy turvy so quickly?

She says she realized something had changed when former Toronto Mayor Rob Ford was found to have a serious drug addiction, and his supporters didn't care.

“Ford made me realize that even in Canada, we were in a post-shame era,” May said. “But honesty and ethics can't be regulated. They have to be part of our general system of ethics of how we live with each other … It's time for Canadians to vote for what you want.”

A university professor once talked about how societies can become addicted to virtue or vice – to expect the worst or the best from its leadership. Right now, Canadians expect the worst.

“We have to re-habituate ourselves to really who we are as Canadians. I know we are really compassionate, really caring, very much focused on community and taking care of each other,” she said.

The Greens are the only party promising to balance the budget, she said, and she's hoping voters fearful of a green future will realize the alternative is worse.

“I think they'll find the changes surprisingly pleasant,” May said. “Canadians can get excited about it because this is not technologically challenging. It's not economically challenging. We do need to make sure we protect workers in sectors that are going to be impacted, but we've got plans for that. What we can't do is sit back and do nothing because in a very short period of time, it will be too late.

“But we can't wait till we have a 100 per cent of the population on board. We do know we have over 80 per cent of Canadians on board. So let's move ahead.”

Big snowfall promised for Sudbury
Jan 18, 2020 5:00 AM
Comments
We welcome your feedback and encourage you to share your thoughts on this story. We ask that you be respectful of others and their points of view, refrain from personal attacks and stay on topic. To learn about our commenting policies and how we moderate, please read our Community Guidelines.