Given that cancer took his wife's life, former Sudbury Wolves coach Mike Foligno said he wants to do whatever he can to find a cure for the disease.
Aug 21, 2013 4:39 PM By: Heidi Ulrichsen 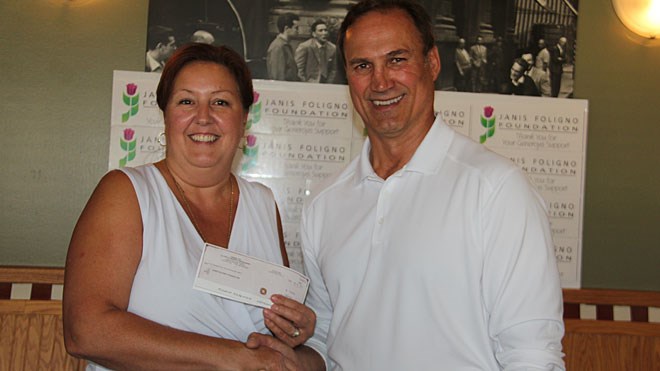 Pat & Mario's owner Leslie Moutsatsos hands Mike Foligno a cheque for a little more than $4,000 from this year's Boobies, Burgers and Beers fundraiser. The money is going towards the Janis Foligno Foundation. Photo by Heidi Ulrichsen.
Given that cancer took his wife's life, former Sudbury Wolves coach Mike Foligno said he wants to do whatever he can to find a cure for the disease.

After Janis Foligno passed away in 2009, her family set up the Janis Foligno Foundation in her memory, and has now donated hundreds of thousands of dollars to causes she supported.

Speaking at an Aug. 20 press conference where the foundation gave away almost $100,000, Foligno said the foundation's focus has shifted towards supporting cancer research.

"In the last year or two, we've really started to gear our efforts towards finding a cure,” he said.

“That's why today, of the almost $100,000 we're donating, we're putting a good portion of that towards research.”

About $40,000 of that total went towards the Children's Hospital of Eastern Ontario Research (CHEO) Institute, which is doing research Foligno thinks is quite promising.

CHEO researchers are currently conducting a Phase 1 study into a virus that attacks cancer cells while leaving healthy cells alone.

Another $25,000 is going towards cancer research conducted by the Advanced Medical Research Institute of Canada (AMRIC) here in Sudbury.

“I think the Janis Foligno Foundation has done a great job of choosing some excellent recipients for their donations,” said Mark Hartman, AMRIC's chief operating officer.

“We'll be working with the foundation to make sure we direct those funds towards cancer research and breast cancer research that is in line with their fundraising efforts.”

Foligno and several family members, including daughter Lisa and sons Nick and Marcus - NHL players with the Columbus Blue Jackets and Buffalo Sabres, respectively - also handed out funds to a few other community organizations.

Meals on Wheels Sudbury, Maison Vale Hospice and the House of Kin each received $10,000 and the Independence Centre and Network (ICAN) received $5,000.

Foligno said his wife was involved in many of the organizations to which the foundation has donated money.

“We're trying to make sure that her wishes keep going with the fact that we're trying to help people in our community in areas that she was looking forward to helping,” he said.

The press conference was held at Pat & Mario's, which raised more than $4,000 for the Janis Foligno Foundation this summer, and about $10,000 over the past two years.

The money was raised through their “Boobies, Burgers and Beers” promotion, where $2 from every burger sold at the restaurant over about five weeks is donated to the foundation.

Leslie Moutsatsos, who owns the restaurant with husband, Junior, said she's known the Foligno family for a long time — she went to school with Janis — and wanted to do something to help the foundation.

Foligno said he's thankful to community members like the Moutsatsos family who have stepped up to donate. “We have a very generous, giving community,” he said.