Jousting the draw of Celtic Festival

A flurry of feathered hooves pound the ground while metal-clad “knights” rely on skill and instinct to come out on top of the battle. They gallop toward each other, lances carefully aimed, and there's no telling what might happen.
0
May 7, 2012 4:42 PM By: Jenny Jelen 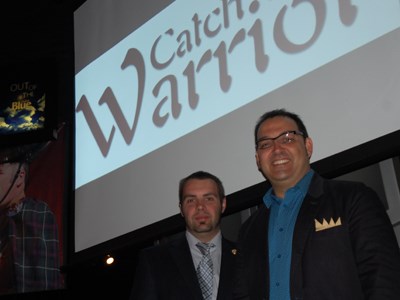 Derek Young, producer of the Sudbury Celtic Festival and Highland Games, and Glenn Thibeault, Chieftain of the Games and Sudbury NDP MP, are getting ready to 'Catch Your Warrior' spirit at the fifth annual festival. Photo by Jenny Jelen.
A flurry of feathered hooves pound the ground while metal-clad “knights” rely on skill and instinct to come out on top of the battle.

They gallop toward each other, lances carefully aimed, and there's no telling what might happen.

The only way to find out is to stop by the Sudbury Celtic Festival and Highland Games, taking place June 1 and 2 on the shores of Ramsey Lake at Bell Park.

The theme of the fifth annual event is Catch Your Warrior — the Knights of Valour, as seen on Full Metal Jousting on the History Channel, are a perfect addition to the event. They will be performing June 2 only.

“Given the recent popularity of jousting, this event is a major coup for the festival and our community,” Glenn Thibeault, Chieftain of the Games and Sudbury NDP MP, said.

There will also be dance presentations by The Irish Heritage Club Youth Dancers and Trinity Toe Tappers, a ScotDance Highland Dance Competition, as well as children's activities, Scotch and Whiskey tastings, pipe bands and the ever-popular Canadian Federation of Scottish Athletes competition.

According to festival organizer Derek Young, the event wouldn't be possible without community support.

In honour of one man who will be noticeably absent this year, Young and the others responsible for hosting the event said this edition of the festival will be dedicated to Robert Russell.

“I first met Robert through the arts council and developed a great friendship with him,” Young said. Russell was in a car crash on Highway 17 that claimed his life earlier this year.

“We are honoured to dedicate this year's festival to a lovable man, artist and poet,” Young said.

Tickets to the festival will be available as of May 9 at Peddler's Pub, Records on Wheels, Bertolo's, Rock Topic and sudburycelticfestival.com.

Tickets inlucde a $20 inclusive family and individual weekend pass which includes up to two adults and three children under age 12. For those planning to attend Saturday day only, a general admission ticket of $5 per person excluding the evening concert is available.

Individual concert tickets can also be purchased per event and includes admission to the festival. Children under age five are admitted free to all events.