Judge allows appeal of city's acquittal in death of Cecile Paquette, who was run over by grader

It's in the public interest, judge rules, considering how often municipalities hire contractors
0
Oct 31, 2019 9:57 AM By: Darren MacDonald 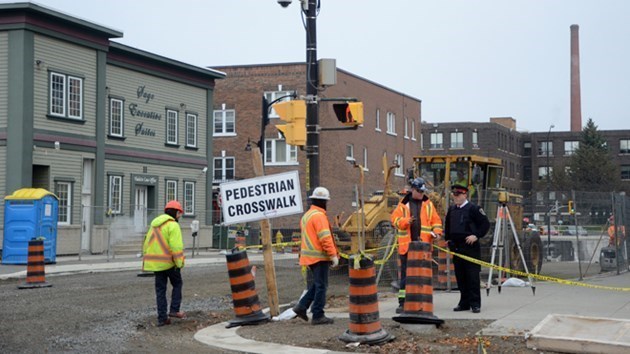 Even if there's no error in law, an appeals court has ruled it's in the public interest to allow an appeal of Greater Sudbury's acquittal in the 2015 death of Cecile Paquette.

In a decision released this week, Justice David Brown of the Court of Appeal of Ontario reversed the decision by Ontario Court Justice Karen Lische in 2018, a decision upheld by Superior Court Justice John Poupore in June of this year.

Paquette, 58, died Sept. 30, 2015, at the corner of Elgin and Beech streets when a grader operator ran her over, killing her. The contractor hired by the city for the road work, Interpaving, was convicted in March 2018 of failing to provide a signaller during the operation of a moving machine in a workplace while the operator’s view was blocked. The company was fined $195,000.

The main source of the dispute is the definition and responsibilities of an “employer” and “constructor” under Ontario law. Greater Sudbury argued that it was the employer, and Interpaving was the constructor, and therefore largely responsible for the job site.

Lische ruled that having oversight control of the project didn't mean Greater Sudbury was responsible for Interpaving's failure to follow the rules. And Poupore cited a section of the Ontario Health and Safety Act in agreeing with the original decision.

“An owner does not become a constructor by virtue of the fact that the owner has engaged an architect, professional engineer or other person solely to oversee the quality control at a project,'” he wrote in his ruling.

While accepting that the “constructor” had primary control over the job site, Brown wrote that the definition of the responsibilities of the “employer” is an issue worthy of the court's time. And legislation allows courts to grant appeals in “special” cases, when the judge believes it's in the public interest, even if there's no obvious error.

“The interpretation of 'employer' in the OHSA adopted by the courts below may, at the end of the day, be free from legal error.” he wrote. “However, a large number of municipal infrastructure projects are undertaken in this province each year in which the municipality contracts the work out to a third party.

“Whether a municipality may or may not fall within the definition of 'employer' in respect of such projects by reason of the degree of control it exercises over the project engages a question of law alone of interest to the public at large. As such, special grounds for leave to appeal exist.”

Brown also ruled that Lische, in her original decision, erred in the way she accepted the city's arguments that it had done its due diligence in monitoring the job site before the tragedy.

The Crown argued Lische should not have accepted the argument the city had fulfilled its due diligence requirements through general acts, not specific ones. At the very least, he wrote having the city demonstrate the specific acts is worth the court's time.

“I do not regard the trial judge’s findings on the due diligence defence as an obstacle to granting leave to appeal on the legal question of the definition of 'employer,' given the interest to the public at large of that legal issue.

“As a result, I grant the Crown leave to appeal from the acquittals of Sudbury on the counts that alleged the municipality had breached its duties under the OHSA as an 'employer.'”