Shortly after a pedestrian was struck by a minivan and injured March 18 while in the crosswalk in front of the Rainbow Centre, several bystanders said they had almost been hit more than once crossing at that crosswalk.
0
Mar 26, 2013 3:20 PM By: Darren MacDonald 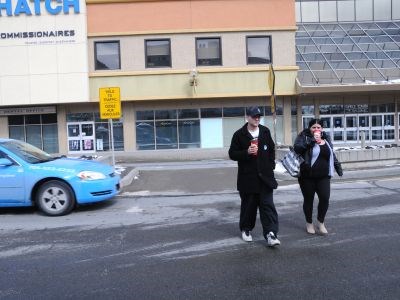 Leaving the Elm Street crosswalk in front of the Rainbow Centre alone is the best of several bad options, a study of the Elm Street crossing concluded last year. A driver was charged March 18 with careless driving for hitting a pedestrian in the crosswalk. Photo by Marg Seregelyi.

Shortly after a pedestrian was struck by a minivan and injured March 18 while in the crosswalk in front of the Rainbow Centre, several bystanders said they had almost been hit more than once crossing at that crosswalk.

“This big truck came this close to hitting me,” one woman said, holding her thumb and index finger an inch apart. “He stopped just in time.”

Motorists who regularly travel that part of Elm Street in downtown Sudbury could also share stories of near misses at the crosswalk, which connects the mall to the Sudbury Transit bus terminal and the Tim Hortons coffee shop across the road.

It crosses four lanes of busy traffic, and drivers’ view of pedestrians is often blocked by vehicles in the right lane.

While not an ideal situation, David Shelsted, the city’s director of roads, said leaving the crosswalk in place is the best of several options they have studied.

“When we looked at (pedestrian) behaviour, we decided to leave it in its present state,” Shelsted said.

Staff conducted a detailed review, and considered putting traffic signals in, relocating the crossing, putting in signs and signals, removing it entirely or considered leaving it as is. The problem with removing it, Shelsted said, is that pedestrians would continue to cross anyway, because of the constant traffic coming from the bus station.

“There was a heavy desire line on the behalf of pedestrians,” he said.

Removing it would mean people would be trying to cross in much more dangerous circumstances, and would be far more likely to cause an accident and be injured.

The mall owners closed one of the entrances last year in an attempt to discourage people exiting Tim Hortons and the bus depot from crossing there to get to the mall. So city staff went back to evaluate what sort of impact it had on the number of pedestrians using that crosswalk.

“Usage of the crosswalk had declined 20 per cent, but there was still 600 crossings in the two-hour period over lunch,” Shelsted said.

There was increased use of the protected crossings at the corners, but the crosswalk still had more than three times the traffic than the crossings with traffic signals.

“If I close that section right there, people are still going to wander across the road to get to where they want to go,” he said. “And the city can’t really put a fence on Elm Street from Paris Street to Lisgar Street. There are a lot of parking lots – in the Rainbow Centre and to the south, as well.”

Worse, some pedestrians would try to jump the fence and put themselves in an extremely vulnerable position, Shelsted said.

“They would find themselves in a small area, squeezed between traffic and the fence,” he said. “So we’ve basically concentrated them in one area, as opposed to having people try and cross at any point along that road.”

They can’t put in traffic lights at the crosswalk because they would be too close to the lights at the corner of Paris Street. It would significantly increase traffic congestion and create a new hazard.

“If you were coming down the Lloyd Street hill, you would see two sets of lights very close in front of you, and you may mistake one for the other,” he said. “The one in the distance may be green, but the one you should be paying attention to is red, you may proceed and cause a collision.”

The city is looking at improving signage at the crosswalk, to make the rules a little more clear. Pedestrians must wait until they have a clear lane to begin crossing, but once they’re in the crosswalk, drivers must stop.

“Right now, the sign facing pedestrians says, ‘Yield to traffic,’ ” Shelsted said. “The new provincial standard will (require signs) that say, ‘Pedestrians yield to traffic.’ So it adds more clarity, and we’re looking to add that sign there.”

Joe Zito, who manages the Rainbow Centre, said the mall has wanted the city to get rid of the crossing for a number of years. He says it mainly attracts unwanted traffic from the coffee shop and the bus terminal.

“We’re not supposed to be a hangout,” Zito said. “Bus terminals are supposed to encourage people to take buses. Our bus terminal seems to encourage the less desirable crowd to hang around, smoke, swear and harass regular bus passengers.”

Zito said when security at the bus terminal kicks such people out, the cross at the crosswalk and hang out at the mall.

“It’s still a source of aggravation,” he said.

The mall closed one of the Elm Street entrances last year to try to stem that traffic, Zito said, and that improved the situation. But there are still too many people coming into the Rainbow Centre to hang out rather than shop, he said. So they’re considering reducing the hours the mall is open to reduce unwanted traffic.

“The rest of the downtown closes up (at 6 p.m.) and we’re the only place open, so everybody congregates here,” he said.

“I’m contemplating doing that for the whole mall – reducing the hours from 9 a.m. to 6 p.m. We can’t fight this battle alone anymore.”

He said the crosswalk is also dangerous, and the city could be sued if they know it’s dangerous and fail to act.

“I think the city is creating a hazard.”

But Shelsted said the statistics tell a different story.