A study by KPMG is throwing cold water on a proposal to re-route railway tracks and infrastructure around the city and away from downtown Sudbury, Northern Life has learned.
0
Aug 12, 2013 4:07 PM By: Darren MacDonald 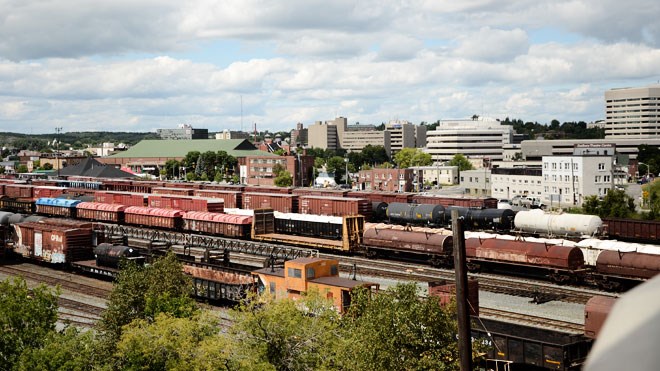 Re-routing railway tracks and infrastructure around the city and away from the downtown is too cost-prohibitive, concludes a report by KPMG. Photo by Arron Pickard.

A study by KPMG is throwing cold water on a proposal to re-route railway tracks and infrastructure around the city and away from downtown Sudbury, Northern Life has learned.

The study, entitled "Evaluating the Potential for Relocation of the Downtown Rail Yards", was presented at a meeting of the Greater Sudbury Development Corporation last month. It recommended the city not help fund a feasibility study to take a more detailed look at the plan.

The proposal from Imagine Sudbury would see the rail infrastructure moved to lands north of the city, which would mean uprooting active tracks used by CP and Huron Central railways and linking them with Vale's private tracks.

The KPMG report dismissed that idea, citing the huge costs and the fact an active main line has never been relocated before in Canada. A similar study conducted by the former Region of Sudbury in 1981 came to the same conclusion, the report said.

It would cost hundreds of millions of dollars, and would have to be funded by the public sector, since the rail companies have shown no interest in either moving or helping to pay for the plan.

“Relocation of the railyards would not entail the complete removal of rail infrastructure from the downtown core,” the report says. “Diverting the CP trans-national mainline and connecting rail links to Sault Ste. Marie and North Bay would ultimately be cost prohibitive.”

In an emailed response to a series of specific questions – such as whether they would support the plan if the costs were paid for by the public sector, or whether they would help fund the plan -- a spokesperson for CP Rail would only say it has no plans to move its rail infrastructure.

“CP’s current Sudbury operation and rail yard suits the needs of our company and we have no immediate intentions of relocating our operation out of town,” wrote Kevin Hrysak, CP's media relations manager in Canada.

“CP values the relationship we have with the communities in which we operate, including Sudbury. CP will continue to work directly with local officials on matters of common interest, including any questions about our rail operations.”

The KPMG report said cases where rail lands have been successfully transformed, two factors were key: the land was no longer needed by the rail company, and there was a specific economic development proposal to support the effort.

Even a scaled-back plan to partially transform the rail lands, which would still leave the tracks where they are, would only make sense if there was a significant infrastructure project to justify the expenditure – such as a major multi-use complex that would include a new Sudbury Arena – and if it qualifies for funding under federal and provincial government infrastructure programs.

“In the absence of positive responses to these questions, there is little to no basis for proceeding with a feasibility study now or in the near to mid-term future,” the report says. “While there may be merit in further investigating the potential of this initiative, we suggest that a full feasibility study would be premature at this stage.”

Imagine Sudbury has been promoting a rail relocation plan since 2009. In 2011, David Robinson, a Laurentian University economics professor, wrote an analysis of what the project would involve. That report pegged the costs at between $235 million and $468 million.

But that estimate didn't include land acquisition and cleanup costs, and assumed CP would give the city the property in exchange for land where the new rail station would be built.

Robinson reacted angrily to the KPMG report, saying it failed to look at the full proposal to relocate all rail infrastructure.

“The KPMG study gets almost everything wrong,” he wrote in an email. “It was incorrectly scoped, poorly researched, backwards looking and an outrageous waste of public money. It is also inconsistent, mildly insulting and rather badly written.”

In an interview, Robinson said the Imagine Sudbury plan makes economic sense for all the parties involved, since the rail companies would save hundreds of millions of dollars by not having to slow down when they travel through Sudbury.

Using estimates that calculate how much it costs to operate trains per minute, he said the companies would recover their costs for the relocation work and would eventually improve their bottom line.

And the city would gain access to more than 50 acres of prime downtown real estate that could be used for residential or commercial uses that would add millions to the city's property tax base.

“You could even put a casino there, if you're an idiot,” Robinson said. “(But) the KPMG commentator appears not to know what 'this proposal' is. Imagine Sudbury has proposed that the big players (CP, Vale and the city) get together and see if they can come up with a win-win-win plan because we believe that the economic gains can make it profitable for all.”

All the group wants at this stage, Robinson said, is support for a feasibility study to take a more detailed look at the plan, and to begin a conversation with the railways on what obviously would be a long-term process.

“That was what the feasibility analysis we proposed was to do. Whoever set the terms of reference for the KPMG study didn't seem to know what the discussion was about.”

Oscar Poloni of KPMG's Sudbury office said he couldn't comment on Robinson's reaction, other than to say KPMG “stands by the report” and its conclusions.

But Ian Wood, the city's director of economic development, said the report delivered what the GSDC was looking for: whether there is a business case for the Imagine Sudbury proposal.

“Our feeling was we needed a bit of an independent look at this,” Wood said. “The report puts into context ... what the realistic possibilities might be. It makes it clear there's probably a requirement for significant public investment in order for this to take place.”

While the GSDC has decided not to support the feasibility study, Wood said he has offered to meet with Imagine Sudbury to discuss the matter further.

“To date, I haven't heard anything” back from them, he said.

But he said a “reputable” firm like KPMG has concluded that the plan isn't realistic because of a lack of interest from the private sector, and the huge expense involved that would almost certainly have to be paid for by taxpayers.

“That's it in a nutshell,” Wood said.

The plan has been in the headlines recently following the disaster in Lac Megantic, in which 47 people were killed when a derailed train carrying fuel exploded, destroying much of the downtown in the process.

Wood made it clear that the KPMG only looked at the economic implications of rail relocation, not safety issues.

Representatives from Imagine Sudbury are expected to appear at city council next month to present their arguments.