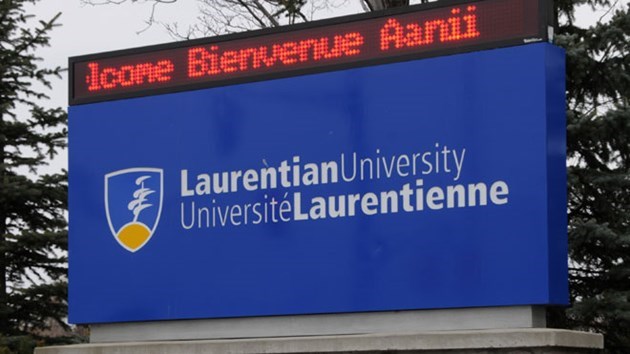 Laurentian University, LU, Laurentian University sign
Laurentian University's mining and mineral engineering programs have been counted among the best in the world by a Chinese educational consultancy. In their 2019 Global Ranking of Academic Subjects, Shanghai Rankings rated Laurentian as 50th in the world and sixth in all of Canada.
The Sudbury school revealed the results of the ranking in a Sept. 9 news release.
While different educational institutions from China and Australia compete for the top 10 spots, McGill University and the University of Alberta were rated in the top 20 followed by the University of British Columbia, Queen's University and the University of Toronto.
Want to read more stories about business in the North? Subscribe to our newsletter.
Since 2003, the ARWU has been ranking global universities using “transparent methodology and objective third-party data.” This year, they considered 1,000 educational institutions in their publication, Academic Ranking of Global Universities. They evaluated 54 different subjects across the disciplines of Natural Sciences, Engineering, Life Sciences, Medical Sciences, and Social Sciences. The ranking was based on a few key factors, starting with meeting the minimum requirement for research publications featured in academic journals.
Much of Laurentian's success has been a direct result of their collaboration with institutions in other countries. Their tradition of cooperating across borders is what continues to garner the university  international attention.
“Due to its location in Sudbury with so many active mines and the major mining companies, Laurentian University has been, since its inception, quite strong in teaching and research in mining engineering. We are very pleased with such recognition, and we attribute it to the dedication and high calibre of the professors in the Bharti School of Engineering,” commented Dr. Osman Abou-Rabia, Dean of Science, Engineering and Architecture.
Laurentian University said it hopes to continue to forge a path for mining research in Canada and congratulated their colleagues at the Goodman School of Mines, the Bharti School of Engineering, and the Harquail School of Earth Sciences.