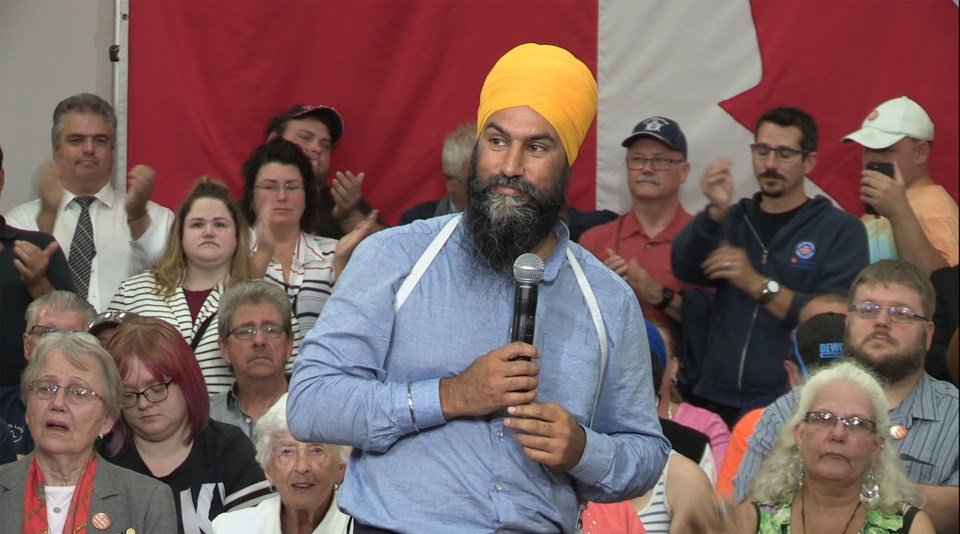 New Democrat Leader Jagmeet Singh came to town Tuesday to support Sudbury NDP candidate Beth Mairs – and to send the message that they are the party that really fights for average Canadians.

With the NDP closer to the Green Party than the Liberals or Conservatives in national opinion polls ahead, New Democrats are trying to get the message out that Prime Minister Justin Trudeau talks a progressive game, but fails to deliver.

“I'm hearing heartbreaking stories every day at the door about the challenges people here are facing every day to make ends meet her in Sudbury,” Mairs told the crowded gathering at Steelworkers Hall on Brady Street. “I hear frustration about politicians, saying one thing then not doing them. Jagmeet Singh is different. He's talking about how to really make things better for people here in Northern Ontario – and across the country.

After praising Mairs – Singh said “she's going to be an incredible representative here” – he unveiled the NDP's plans to extend dental and pharmacare coverage to those who can't afford it.

“For millions of Canadians, they can't afford to go to the dentist — it is a massive question of affordability, especially for families,” he said. “So I think about why we're in this position — why it's kind of getting tougher and tougher for people to make ends meet.

“We look at the economy and the economy seems to be booming. But I ask you who's it booming for?”

While corporations are making billions of dollars, ordinary people are finding it tougher to get by – and that's because the Tories and Liberals won't take them on.

“They've consistently, regularly chosen to make life easier for the very top, for the well-connected insiders,” Singh said. “It's easier and easier for them and it's harder for everyone else.”

He pointed to Trudeau's promise to lower the cost of medication during the 2015 campaign. There was a way for him to lower costs by 20 per cent, but Singh said it would have negatively impacted profits of pharmaceutical companies.

In 2019, he said Trudeau is promising again to lower the cost of medication, but there's no reason to believe him.

“That's the thing with Liberals and Conservatives. You get, again and again, governments that don't choose to help people.”

In response to a question about people who weren't ready to vote for someone “who wears a turban,” he acknowledged there's some “prejudice that exists in society.

“I've experienced a little bit of what that's like, and I want to build a Canada where no one's left behind, where everyone can get ahead.”