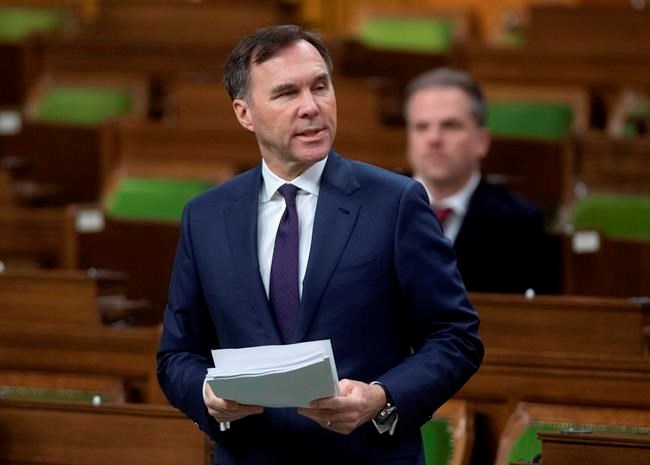 OTTAWA — The federal government is repackaging two previously promised benefits for Canadians whose working lives are disrupted by COVID-19.

Instead, the Liberals say there will now be one benefit to provide $2,000 per month for four months to workers whose income drops to zero because of the pandemic, including if they have been furloughed by their employers but technically still have jobs.

Speaking in the Senate, Finance Minister Bill Morneau told senators that the move should help get money to affected workers faster than under the previously announced model.

When the Liberals unveiled their response package, they proposed two benefits — one to flow through the employment insurance system and another for those who don't qualify for EI benefits, such as self-employed workers.

Morneau said the new, combined benefit should be simpler to administer and get to workers with a target delivery date of April 6.

The House of Commons approved the stimulus package in the early hours of Wednesday and the Senate is expected to approve the bill by this afternoon.

If approved, affected workers would have to fill out an online application and meet what Morneau says will be a few, limited conditions to qualify.

As Morneau appeared in the Senate, Prime Minister Justin Trudeau said in a news conference outside his Ottawa residence that the government has redeployed thousands of civil servants to work on the benefits package so the funds can flow to people as soon as possible.

Trudeau said the new benefit should be in people's pockets within 10 days of their applications — meaning the help won't flow until the middle of April at the earliest.

This report by The Canadian Press was first published March 25, 2020.

Ford to provide COVID-19 update at 1 p.m.
Jun 4, 2020 12:03 PM
Comments
We welcome your feedback and encourage you to share your thoughts. We ask that you be respectful of others and their points of view, refrain from personal attacks and stay on topic. To learn about our commenting policies and how we moderate, please read our Community Guidelines.