They say they don't want any school to close, but are providing trustees with alternatives
Oct 25, 2016 5:00 PM By: Heidi Ulrichsen 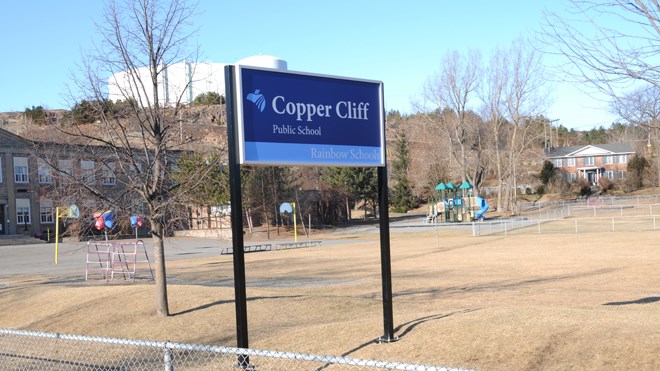 Parents trying to save Lively District Secondary School are proposing closing the elementary school in Copper Cliff to do it. Supplied photo.

Parents trying to save Lively District Secondary School are proposing closing the elementary school in Copper Cliff to do it.

The Save Lively High School Committee is presenting at the Rainbow District School Board meeting this evening.

Included in the presentation are a number of options the parents hope would prevent Lively High from closing as soon as next fall along with 11 other schools the Rainbow board is looking at shuttering.

One of the proposals the parents are putting forward is closing Copper Cliff Public School, located about 15 minutes down MR 55, and moving its junior kindergarten to Grade 5 students to Walden Public School. Incidentally, Copper Cliff isn't one of the schools the board has slated for possible closure.

Under the proposal, Grade 6-8 students from Copper Cliff and Grade 6 students from Walden Public School would be moved to Lively High, which currently has Grade 7 to 12 students.

Robin White, who's making the presentation tonight on behalf of the Lively High delegation, said the committee doesn't want to see any of the board's schools close.

But since the board seems intent on closing schools, the committee is providing a few alternatives.

“It's a pretty short commute from Copper Cliff to Lively on a divided highway that is very safe,” he said. “I personally don't feel it would be a huge drawback to the Copper Cliff community to join forces with Lively.”

If Chelmsford Valley District Secondary School were to close — it's also on the chopping block — White said it makes much more sense for them to travel to Lively than a school in the city's core.

“We feel there's a closer resemblance in the mentalities of the community that'd be a great fit for us and for them,” he said.

And the magnet programs at these two schools are drawing students away from outlying communities, he said.

Most school groups will be providing input to the Rainbow board at its December meeting. However, White said the Lively group wanted to address the board early because trustees have so much to consider.

“We hope the trustees and board of administration is approaching it with open ears and open minds, and that the decision has not been made already,” he said.

Gas prices drop by a cent overnight
Aug 12, 2020 7:16 AM
Comments
We welcome your feedback and encourage you to share your thoughts. We ask that you be respectful of others and their points of view, refrain from personal attacks and stay on topic. To learn about our commenting policies and how we moderate, please read our Community Guidelines.