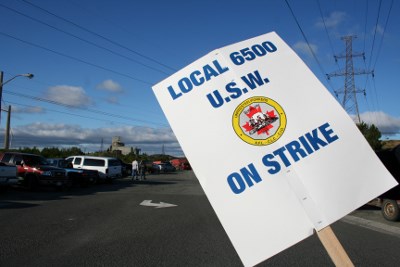 Mediator Kevin Burkett called off mediated talks between Vale and Steelworkers Local 6500 June 29. The one-year anniversary of the strike is July 13. File photo.

Both Vale and Steelworkers Local 6500 are tight-lipped about details of a five-year tentative deal reached between the two parties July 4.

Union members will hear about the contract at membership and ratification meetings at the T.M. Davies Community Centre in Lively July 7 and 8.

Union stewards and health and safety representatives will be briefed on the contract July 7 at 11 a.m.

Members of Steelworkers Local 6200, which represents Vale workers in Port Colborne, Ont., will also vote on the contract July 8. Local 6200 bargains along with Local 6500. Both unions have been on strike since July 13, 2009.

Vale spokesperson Cory McPhee said he could not say much about the contract in advance of the ratification votes. The contract will not be posted on the company's website, www.valeinconegotiations.com.

Contract proposals were posted on the website twice in the past — just before the union members went on strike last year, and after another attempt at negotiations in March.

“I think in the past, when you've seen the contract posted, it's been more of a confrontational situation where we felt that aspects of the deal were perhaps being misrepresented,” he said.

“In this case, we do have a tentative agreement. The proper protocol is to allow the members to see it first.”

The tentative deal came about after mediated negotiations between the two parties in June. On June 29, mediator Kevin Burkett announced he was terminating mediation because the two parties were deadlocked on one remaining issue.

The two sides had agreed to allow the fate of nine strikers fired by Vale during the labour dispute to be dealt with by the Ontario Labour Relations Board as part of the union's bargaining in bad faith complaint.However, lawyers from both sides could not agree on how the issue should be submitted to the labour board.

With the assistance of another mediator, Reg Pearson, the company and union went back to the table over the weekend, and announced during the late afternoon of July 4 that they'd come to a resolution.

Reaction was swift from both Greater Sudbury Mayor John Rodriguez and Sudbury MPP Rick Bartolucci after they heard about the tentative agreement.

Bartolucci, who has remained neutral throughout the strike, stating that taking sides would put him in contravention of the Members' Integrity Act, a law governing the conduct of MPPs, said he was thankful the two parties had “returned to the table at the advice of the McGuinty government.”

“All involved deserve a great deal of credit,” he said. “It is now time for our community to heal and once again reach its fullest potential.”

Greater Sudbury Mayor John Rodriguez said the deal was “the news we have all been waiting for.”

“I am relieved that the intense negotiations that took place over the past weeks have resulted in a deal that the union bargaining team feels they can recommend to their membership,” Rodriguez said.

Fera said Fonseca's intervention was “very, very important. It certainly sent a message to both parties that the government understood how big these hurdles were, and how difficult it was to get over these hurdles. He came in and intervened, and helped both sides get to a tentative agreement.”

The labour board will hold a hearing dealing with the matter of the nine fired employees July 9.

Fera said he's confident the labour board hearing will go the union's way. When asked if the union will continue with the rest of its bargaining in bad faith complaint, he said “We'll be talking to our members about that.”

McPhee said Vale is hopeful the tentative deal will be ratified, “but we can never presume the results of the vote. That's up to the individual employees.”

When asked how the nearly year-long strike, which McPhee admits has been a “long road,” has impacted the company's finances, he said he couldn't give any exact figures.

“Obviously, whenever a company is affected by a strike, it's never good for the company's bottom line,” he said. “We prefer to be in normal operations, and hopefully this is the first step towards getting back to normal operations.”