The Positive Inception focuses on personal growth and improvement
Aug 17, 2016 9:00 AM By: Jonathan Migneault 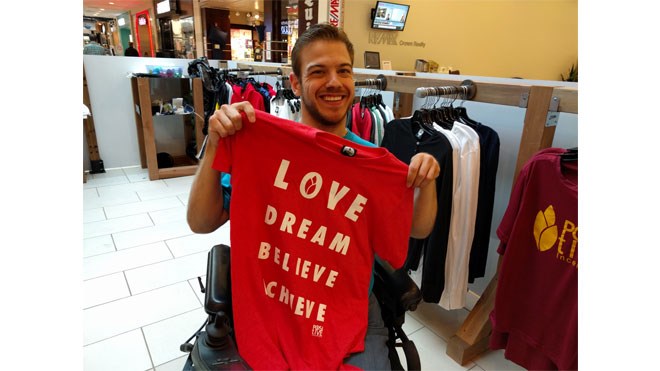 Ryan Benoit is in the New Sudbury Centre for the month of August to promote his brand The Positive Inception. His casual and athletic wear includes inspirational messages for athletes and anyone else. Photo by Jonathan Migneault.

Ryan Benoit's local clothing brand, The Positive Inception, has gone beyond his early expectations only two years after he had the idea to create clothing with positive messages.

Benoit, a recent graduate of Laurentian University's sports administration program, started The Positive Inception in early 2014 to give aspiring athletes, or anyone, a positive boost in their lives.

For the month of August The Positive Inception has taken up a physical spot at the New Sudbury Centre. across from Champs Sports.

The brand's logo is a seed, which represents new beginnings.

“When you plant a seed it's the start of something new,” Benoit said.

Benoit said the adversity he has faced in his personal life helped him build and grow the company.

He was born three months premature, and was diagnosed with cerebral palsy shortly thereafter.

Sports were always one of Benoit's biggest passions, but because of his physical disability, he was never able to participate in physical activities to the same degree as his peers.

“Even though I can't play sports like most people, I can still be involved in some fashion,” he said.

Through Laurentian's sports administration program, and The Positive Inception, he has been able to maintain that connection to sport.

Thanks to the brand, Benoit said he has had the chance to meet a lot of interesting people and local athletes, who have really connected with his message.

Recently, a Champs Sports employee he befriended got The Positive Inception logo tattooed on his chest.

Benoit said it was humbling to think someone had been so impacted by his message that he would carry the symbol on his body for the rest of his life.

Beyond inspiration, The Positive Inception has also provided support for worthy causes.

One dollar from every item sold goes to Easter Seals Ontario.

Benoit was the organization's regional ambassador for two years, and said it still holds a special place in his heart.

He is also selling a special hoodie that supports the Laurentian University lacrosse team, and has a t-shirt that helps support ALS research.

While the brand has been doing well – Benoit has shipped clothing as far away as Australia – he said his ultimate goal is for The Positive Inception to become a household name.

“If you're positive and set your mind on what you want to do you can achieve anything you want,” he said.