Holly Wright is just like many other 12-year-old girls. She shares many of the same thoughts and feelings as other girls her age. She likes Justin Bieber and Selena Gomez, for example.
0
Nov 7, 2011 8:46 PM By: Arron Pickard 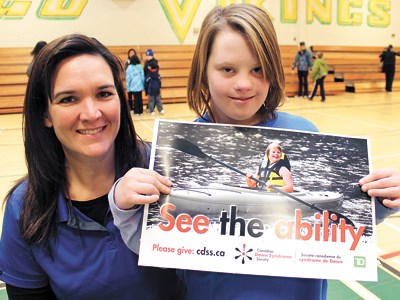 Holly Wright, 12, and her mom, Lisa, show off a sample of the photo that will appear on 700 billboards across Canada as part of the Canadian Down Syndrome Society’s campaign, called See the Ability. The photo depicts Holly during her first kayak experience. Photo by Arron Pickard.

Holly Wright is just like many other 12-year-old girls.

She shares many of the same thoughts and feelings as other girls her age. She likes Justin Bieber and Selena Gomez, for example. In fact, she likes many of the pop icons adored by other girls her age. Holly, for all intents and purposes, is an average tween. The only thing that sets her apart from her peers is that she was born with Down syndrome.

Down syndrome is a naturally-occurring chromosomal arrangement that has always existed, and is universal across racial, gender and socio-economic lines. It is the result of extra genetic material associated with the 21st chromosome, and its symptoms vary from individual to individual, but it more commonly results in an effect on learning, according to the Down Syndrome Association of Sudbury.

This doesn’t stop Holly from living her life the way it is meant to be lived by an energetic 12-year-old. It has also garnered her national attention. Holly was selected to be the poster girl for the Canadian Down Syndrome Society’s See the Ability campaign. A picture of Holly during her first kayak experience will be posted on 700 billboards across Canada, several of which might be erected around Sudbury.

“We’re really excited about this,” Lisa Wright said. “We thought it was going to be a collage of different children with Down syndrome, but when we were told it was just going to be Holly, it was really exciting.”

Each year, Wright submits a photo of Holly to the Canadian Down Syndrome Society for the organization’s annual calendar publication. She said she chooses photos that feature Holly engaged in the activities that are a part of her daily life.

This year, during Holly’s birthday, she learned to kayak at the family camp on Fairbank Lake, and a photo was captured on her very first attempt.

“It was a beautiful picture, so I decided to send it off to CDSS in hopes that it would make it in the calendar,” Lisa said. “Holly is loving this.”

Holly and her mom were participants in the fifth installment of the Down Syndrome Society of Sudbury’s Buddy Walk, the local effort to recognize 2011 National Down Syndrome Awareness Week, which started Nov. 1 and ends Nov. 7. This week celebrates the lives of Canadians with Down syndrome, who are going to school, working, getting married and making important contributions to the community.

Hundreds of people walked a short distance Nov. 6 for the Buddy Walk. They started at Lockerby Composite School and walked to Health Sciences North and back. The event raised $8,700 for the DSAS.

Reminder from MNRF: Hunting, fishing regulations unaffected by COVID-19 pandemic
Apr 1, 2020 11:00 AM
Comments
We welcome your feedback and encourage you to share your thoughts on this story. We ask that you be respectful of others and their points of view, refrain from personal attacks and stay on topic. To learn about our commenting policies and how we moderate, please read our Community Guidelines.