Look at those smiles: Couple separated by the long-term care system reunited 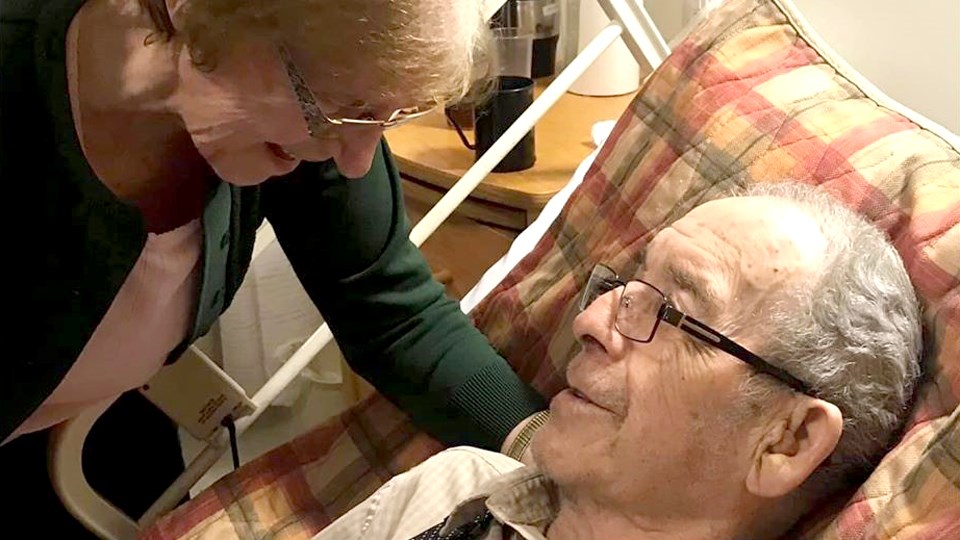 Bertha Levesque stares lovingly into the eyes of her husband after the couple, separated by the long-term care system, were finally reunited at Finlandia Village. Nickel Belt MPP France Gélinas drew public attention to the couple’s plight a week ago. (Supplied)

A year after being separated by the long-term care system, Bertha and Rhéal Levesque are finally together again.

The Sudbury couple were reunited at Finlandia Village on Feb. 26 after more than a year apart, and a week after Nickel Belt MPP France Gélinas made their plight public.

After falling out of bed in December 2018, 87-year-old Mrs. Levesque ended up in hospital. A few weeks later, Mr. Levesque, 88, was hospitalized for severe pneumonia.

Mrs. Levesque developed dementia and needed 24/7 care. Not being able to care for their mother themselves, their children, siblings Lucille Ouellette and Rick Levesque, agreed long-term care was the best option. The sibling's preference was for Mrs. Levesque to move to Finlandia Village, but a bed opened at Extendicare Falconbridge first.

"She needed 24/7 care and we aren’t trained for that," Ouellette said. "We couldn't take care of her ourselves."

The couple have been married 69 years and had never been separated. The forced separation proved detrimental to both of them, but particularly to Mrs. Levesque, who sank deeper and deeper into depression the longer she was separated from her husband. She began refusing to eat, and lost interest in living, Gélinas told Sudbury.com this week.

“She had given up on life,” the MPP said.

A provincial regulation, new in 2018, puts a priority on reuniting family members who have been separated, setting aside beds in long-term care homes for that purpose, but how that regulation is interpreted by the North East Local Health Integration Network (LHIN) isn’t right, Gélinas said.

"There is a crisis in Sudbury for long-term care," she said during a press conference held at Finlandia on Feb. 21. "There are many more people needing long-term care ... so they created this waitlist that they call 'crisis.'

"There are so many people [on that crisis list] that nobody else gets to move into a long-term care home."

Gélinas said the current criteria only takes a person's physical condition into account when declaring someone in crisis. She called on the LHIN to also take mental health into consideration.

Once Gélinas, the NDP’s health critic, brought the issue into the public eye and spoke with Health Minister Christine Elliott, things changed.

“The minister confirmed things to the LHIN that a person’s welfare isn’t just food and shelter,” a person’s well-being is emotional and psychological, as well, Gélinas said.

The Levesques 13-month ordeal is over, but Gélinas said despite the provincial regulation, there are still 37 couples in the Sudbury area at risk of never being reunited because they don't fall under the current "in crisis" criteria.

The Levesque's story is similar to another Sudbury couple who spent six months apart in 2018. Gottfried and Hildegard Adler were reunited at Finlandia in March 2018, again thanks to a push from Gélinas who brought the couple’s story out into the open.