Looking on the bright side

For most of his life, Dwayne Backer has lived with dystonia. For him, that means debilitating muscle spasms and poor fine motor control, preventing him from performing day-to-day tasks such as shaving his own face or writing a grocery list.
May 23, 2012 8:06 PM By: Heidi Ulrichsen 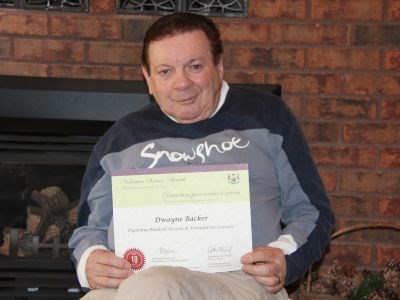 Dwayne Backer was presented with a Ontario Volunteer Service Award May 15 for his efforts in raising funds for the Dystonia Medical Research Foundation Canada. Photo by Heidi Ulrichsen.

For most of his life, Dwayne Backer has lived with dystonia.

For him, that means debilitating muscle spasms and poor fine motor control, preventing him from performing day-to-day tasks such as shaving his own face or writing a grocery list.

But he doesn't let it get him down.

“I try not to think of what I can't do,” Backer said. “I try to think of the positives and what I can do. I try to get rid of the negative thoughts, which helps me quite a bit ... Yes, it prevents me from doing things, but I find other things to replace what I've lost.”

According to information from the Dystonia Medical Research Foundation Canada, dystonia is a neurological disorder that affects the nervous system.

Improper signalling from the brain causes muscles to tighten and twist involuntarily. These muscle spasms force areas of the body into awkward movements and positions.

On May 15, along with several other Sudburians, Backer was presented with an Ontario Volunteer Service Award and a Queen's Diamond Jubilee Award for his work in raising funds for the Dystonia Medical Research Foundation Canada.

“It made me feel good,” he said. “I feel really grateful, but I don't feel worthy enough.”

Every year, Backer raises funds for the foundation by collecting pledges for the Dystonia Support Group of Sudbury and District's annual Freedom to Move event.

This year's event takes place starting at 9:30 a.m. June 10 at the Howard Armstrong Recreation Centre in Hanmer. There will be a barbecue and door prizes.

Last year, Backer raised about $6,000 for the cause, and hopes to meet or exceed that threshold this year.

He raises the funds through pledges collected at the New Sudbury Wal Mart, where he works in the seasonal department, fund matching from his employers and donations from family, friends and neighbours.

“It's nice to have public recognition for work that's often done in the background,” Backer's wife, Pauline, said. “People don't often realize that to raise the amount of money he raises, he spends I don't know how many evenings and part of the night on his computer. He often goes to bed at 2 a.m.”

In 1967, Backer was a young man working in North Bay for the Canadian Air Force when he first started noticing the symptoms of what was later diagnosed as dystonia.

He had a stiff neck which became progressively worse until his neck was bent down onto his shoulder. His condition became worse and worse until he was what he calls a “vegetable” — unable to move at all.

After numerous examinations from doctors, he was finally diagnosed with dystonia, and underwent experimental brain surgery which, to some extent, finally succeeded in loosening his muscles.

He met his future wife, Pauline, while recovering in hospital in his hometown of Mattawa.

The couple eventually moved to Sudbury, where Dwayne attended Laurentian University, graduating with a sociology degree in 1972. Because he was unable to control a pen enough to write, he taped his professors' lectures and took his exams orally.

Backer applied to positions in his field, but nobody would hire him because of his disability.

In 1974, he opened Dwayne's Smoke Shop on Durham Street, which he owned until 1998, when the land was expropriated by the City of Greater Sudbury to make way for a roadway leading to the YMCA building, which was then under construction.

“I thought I'd be retiring, but I found that there wasn't enough to do, and I wasn't ready to just stop working,” Backer said. “I applied to Wal Mart in April 1999, and I've been there since.”

He said he enjoys working at Wal Mart because he meets people every day.
As for coping with the day-to-day realities of dystonia, Backer said the botox treatments he receives in Toronto every four months to relax his muscles have helped somewhat.

He said he also appreciates the support he receives through the dystonia support group.

“You know there's more than yourself with the condition, and you don't feel alone walking on this earth,” Backer said. “It always helps if there's someone that understands what you're going through, and the feelings that you encounter.”