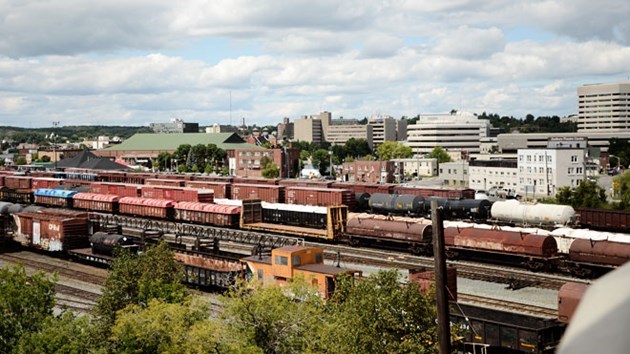 In a live debate on the location of the event centre hosted by Sudbury.com last week, Laurentian University economics professor Dr. David Robinson said CP is talking about relocating the downtown railyard out of the city core. CP says that’s not the case. (File)

The question of Greater Sudbury’s downtown rail yard has one that’s dogged the city for decades.

As far back as 1981, a study was done to look at the feasibility of moving the yard used by CP Rail and Huron Central. The move would free up a large amount of highly-valuable land for development in the downtown, and as such, the idea that moving the yards could be done has never really gone away.

Every few years, the issue seems to pop up again. Like it did last week.

On Sept. 7, Sudbury.com livestreamed a debate between Robert Kirwan, the city councillor for Ward 5, and Dr. David Robinson, an economics professor at Laurentian University. Moderated by Sudbury.com managing editor Mark Gentili, the debate concerned the location of the city’s new event centre and whether locating the facility on The Kingsway would harm the city’s economy.

“There is a serious prospect of moving these railroad tracks eventually,” he said around the 30-minute mark of the debate.

“CP’s talking about it again,” Robinson said. “They’re going to do it because it makes them money … because it reduces the cost of transporting.”

But is CP really talking about it, as Robinson suggested?

Ian Ross, editor of Northern Ontario Business, Sudbury.com’s sister publication, wanted to know, so he fired off an email to Canadian Pacific to see if that was the case.

The short answer is no.

“CP has no desire or plans to move our rail yard as it serves the needs of our railway and our customers well,” said Martin Cej, assistant vice-president of public affairs and communications.

As for the economics favouring relocation, as Robinson suggested, Cej said rail volumes along the corridor that includes the city’s downtown railyard “ebb and flow with the demand from our customers and the strength of the broader economy.”

He didn’t close the door on relocation, however, giving an answer that CP has given, in one form or another, for years. Cej said if Sudbury would like to conduct a study into moving certain rail lines, “CP may participate.”

But he warned relocation “is a complex and serious issue which would involve CP, local and national customers, regulators, local community organizations and all levels of government.”

“An extensive review would need to take place to determine the impact to customer service and the full cost to all stakeholders, which will be significant.”

That study has already been done. KPMG conducted it (the second to be done on the feasibility of relocation; the first was in 1981) back in 2013. That report was spurned by the community group Imagine Sudbury, which began pushing for relocation in 2009.

KPMG found the high cost and the fact no active main rail line has ever been relocated in Canada meant the notion was unfeasible.

In 2011, Robinson himself was commissioned by Imagine Sudbury to produce a report on the cost of relocation and how it could be achieved. He found a barebones, no frills relocation would cost as much as $468 million, a cost that didn’t include land acquisition or cleanup costs, which would drive the estimate likely over half a billion dollars.

Asked about relocation again after a June 2013 derailment in Wanup and the July 2013 tragedy in Lac-Mégantic, Que., Randy Marsh, a CP spokesperson at the time, said moving the railyard would be “onerous” for the city because the community would have to have funds to get the necessary environmental approvals as well as pay for the massive construction costs.

So, as it has said repeatedly, it seems CP has no interest in moving the railyard itself and is only willing to entertain the notion if someone else — namely the city’s taxpayers — are willing to pay for it.