LU restructuring may be an opportunity for post-secondary French education, alumni say

Réjean Grenier, former owner of Le Voyageur newspaper, and Pierre Bélanger, a bison farmer, say Laurentian University’s crisis could lead to the creation of what Northern Ont. Francophones have always wanted: their own university
Mar 8, 2021 6:00 PM By: Heidi Ulrichsen 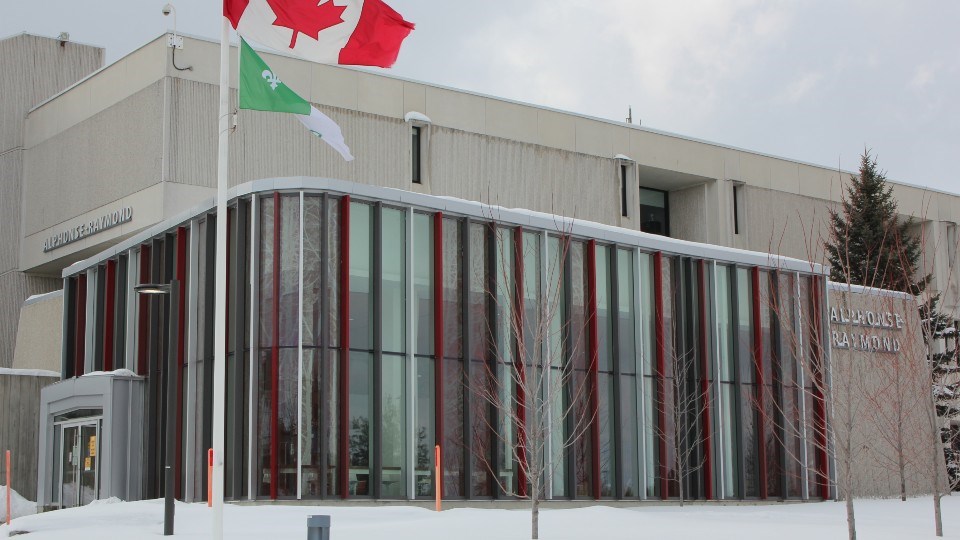 The Franco-Ontarian flag flies outside the Alphonse Raymond Building at Laurentian University. (File)

With fear in the Franco-Ontarian community that Laurentian University’s restructuring could mean more cuts to Francophone programs, some are floating the idea the crisis could give rise to opportunity.

The idea is that a new Francophone university operating out of both Northern Ontario and Toronto could be created, and Laurentian would become a unilingual anglophone university.

Réjean Grenier, the former owner of Le Voyageur newspaper, and Pierre Bélanger, the owner of Bison du Nord, a bison farm in Earlton, both graduates of Laurentian University, wrote about the idea in a recent letter to Laurentian president Robert Haché.

Their plan would see a new, autonomous French-language university operating alongside Laurentian, with campuses in Sudbury, Toronto and Hearst.

A new university campus would not be needed, as the new French-language university could be co-located at existing institutions such as Laurentian or Collège Boréal.

“We think it will save some money for Laurentian, and secondly it would give control over university education to the French community, which is what they always wanted,” said Grenier in a recent interview with Sudbury.com.

“We want a university that is for and by the Franco-Ontarian community, just like our colleges.”

A new Toronto-based francophone university, Université de l'Ontario Français, is already in the works in Ontario, with classes due to start in the spring, but it had only received 19 applications from students in the province as of January.

Asked if the new French-language university he and Bélanger are proposing could be merged with the Universite de l'Ontario Francais, Grenier said “that is what we did not want to say.

“But we do acknowledge that they’re also in some kind of trouble because of enrolment. There might be an opportunity there.”

After announcing earlier this winter that it’s insolvent, Laurentian is currently in the process of restructuring under the Companies Creditors’ Arrangement Act (CCAA), and Franco-Ontarians fear what that could mean for francophone courses at LU.

In information released as part of Laurentian’s CCAA filing, French-language courses are not specifically pinpointed as an area that Laurentian wishes to cut.

“Francophones will always have their place at Laurentian,” Laurentian president Robert Haché said in a statement posted on the university’s website last year, before the CCAA process was announced.

Nine of 17 programs suspended by Laurentian last year due to low enrolment were French-language programs.

“It is important to understand that these admissions suspensions are part of the natural cycle of renewal that occurs in universities over time, and that we continue to offer programs in the disciplines that have been affected by this announcement,” said Haché in the 2020 statement.

As part of the CCAA process, Laurentian said it aims to review its academic program offerings, so that “they better align with programs that students are interested in taking.”

However, Thierry Bissonnette, a professor in Laurentian’s Département d'études françaises, told Sudbury.com the message from administration over the past year is that French programs are “expensive.”

The university argued in court as part of the CCAA process that it has too many courses and programs taught by too many faculty for too few students.

Bissonnette said Haché promised at the university’s last Senate meeting that the bilingual and tricultural nature of the university would be preserved.

“The president made the promise that the bilingual and tricultural aspect will be preserved, but we’re unable to know what that means.

Bissonnette said although “the francophone mission is partly at the core of the university since 1960, we just fear it’s all numbers and money. We feel like a finger is pointed at us.”

The RPF contend that Laurentian’s French-language programmes are not a financial strain on the university.

They actually bring in a yearly grant of $12 million from Canadian Heritage’s Official Languages in Education program, which are supposed to be used specifically for their support. “It’s been really hard to know exactly how this money is spent,” Bissonnette said.

Laurentian has about 1,400 francophone students out of a total student population of about 9,000, Bissonnette said.

He said there is actually a small increase in francophone students at Laurentian, even though the university could do more to improve its French-language programs, and “we have to have a better strategy for international recruitment in French.”

“That’s a really tough question,” he said. “I think it’s good to have this conversation. Myself, I hope it will be possible to have a better federation with more decision power for the French side.

“For me, that would be the best, because we have a nice collaboration with our English colleagues, too. Some programs are bilingual … I hope we wouldn’t have to go there.”

One of Bissonnette’s colleagues at Laurentian, political science professor Aurélie Lacassagne, said she’s open to the idea of a new multi-campus francophone university being created as a byproduct of LU’s restructuring.

“It could be a fantastic opportunity for the Franco-Ontarian community,” said Lacassagne, who said she sat on a steering committee along with Grenier a decade ago that made this recommendation to the province.

“The Liberal government at the time in Ontario decided not to follow that recommendation, and to create this university in Toronto,” she said.

The professor said the reason Université de l'Ontario Français has not been successful in recruitment so far is because it is offering degrees on vague subjects such as “human plurality.”

Lacassagne, who weighed in on some of these issues during a virtual University of Ottawa panel on the subject last week, said she thinks Laurentian will keep some French programs “just to receive the money” — the aforementioned $12 million in federal funds to support francophone programming.

“Also, because the bilingual character of the university is in the incorporation act of Laurentian,” she said.

Meanwhile, the Assemblée de la francophonie de l’Ontario (AFO) has asked to be granted an interested party status by the Ontario Superior Court of Justice in Laurentian’s CCAA proceedings.

“Laurentian University plays an important role in the Franco-Ontarian community as it is currently the institution offering the most French-language post-secondary courses and programming in Northern Ontario,” said AFO president Carol Jolin, in a press release.

“We need to ensure that French-language programming is maintained in Northern Ontario. At this time, no one is raising the concerns of Francophones and the rights of the Franco-Ontarian community before the court in regards to the reconstructive process of the university.

“That is the reason why we are requesting to be included in the Court’s proceedings. Ontario’s Francophone community must be represented to ensure that its rights and interests are upheld and protected.

“The community needs to be assured that the eventual financial agreement and reconstructive plan that will be approved by the Court will respect the francophone aspect of the institution.”

Sudbury NDP MPP Jamie West is also speaking out on the issue.

“The situation calls for concrete actions. Will the premier financially support Laurentian to save the gains of the Franco-Ontarian community in post-secondary education, yes or no?

“Doug Ford and the Minister of Colleges and Universities have dragged their feet for over six months, and we join with Franco-Ontarians to demand action to protect university programs in French in Northern Ontario.

“Will the premier ensure the continuity of all programs in French and of all French-language positions at Laurentian, yes or no?”