Majority of Sudburians believe province was unprepared for pandemic: OCHU

Poll suggests public is skeptical of Ontario government and supports an ‘about face’ on how to treat virus
May 28, 2020 5:00 PM By: Arron Pickard 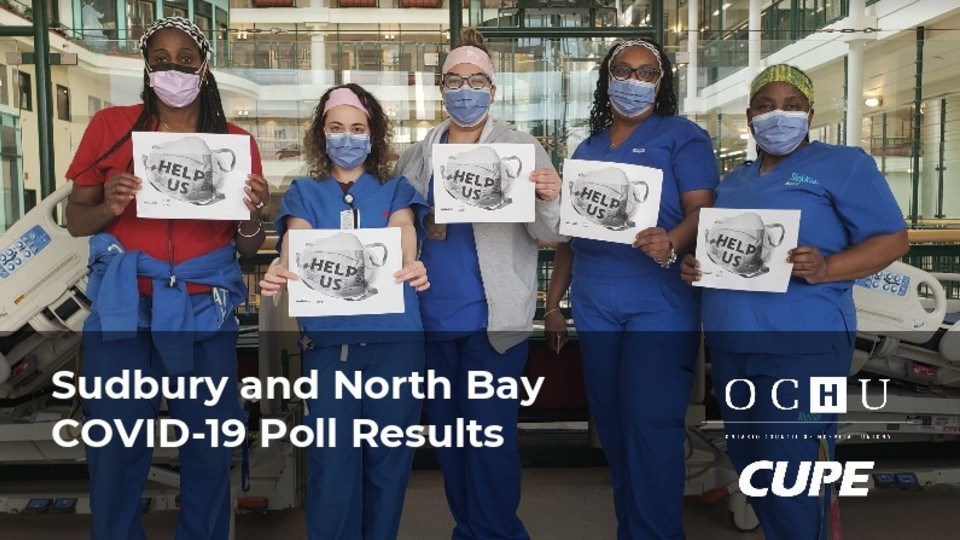 The Ontario government has a lot to answer for in the wake of the pandemic, says the Ontario Council of Hospital Unions, and the results of the poll show the public is highly skeptical and highly supportive of measures to do an about face of how the province is treating this virus. (Supplied)

A majority of Sudburians polled by the Ontario Council of Hospital Unions (OCHU/CUPE) and Canadian Union of Public Employees (CUPE) Ontario believe the provincial government failed to properly prepare for the COVID-19 pandemic.

Of those polled, 68 per cent said the province did not adequately prepare for the pandemic. Furthermore, the poll revealed 58 per cent of Sudburians believe the government should move long-term care residents ill with COVID-19 symptoms to hospital to protect other residents.

Across Ontario, more than 1,538 long-term care residents have died from COVID-19, said Michael Hurley, president of the Ontario Council of Hospital Unions/CUPE, said during a press conference May 27.

“Seniors have died as a result of the province’s stubborn resistance to treat COVID-19 as an airborne virus rather than like influenza,” said Hurley, during the release of the result of their poll via Zoom. The poll was conducted among more than 2,200 Sudbury and North Bay residents on April 28.

Hurley said the Ontario government has a lot to answer for in the wake of the pandemic, and the results of the poll show the public is highly skeptical and highly supportive of measures to do an about face of how the province is treating this virus.

“We’ve been begging the government, showering them with studies, asking them to revisit the issue of whether this virus is airborne, and we’ve been asking them not to treat long-term care residents with COVID in long-term care facilities, but to do what Taiwan, South Korea and Hong Kong have done, which is move them into hospital. The government has refused to do this, and for that, they are culpable.”

The unions are also calling on the government to look at its underperformance in the area of testing, said Hurley. Sudburians seem to agree, with 86 per cent of those polled in favour of widespread testing, while 89 per cent think all hospital patients and staff should be tested for the virus.

Even though Ontario is three months into the pandemic, the province is still testing at a level of around 10,000 tests a day (though it has strayed lower), and it really hasn’t budged, said Hurley. Tests have been completed of all the residents at staff at long-term care homes, but the province has not tested all the staff and patients in hospitals.

The poll also asked whether respondents felt the province needed to toughen its standards for protecting health-care staff at work. Just over 84 per cent of Sudburians support that notion.

As of May 26, 4,485 health-care workers were infected with COVID-19. Twelve of them have died. Consistently, hospital and long-term care workers who are members of CUPE have said they do not have access to the equipment such as N95 masks to work safely, said Hurley.

“It’s true there is a worldwide shortage of N95 masks, which is effective in screening against the airborne particles of this virus,” he said. “Because of this shortage, many are working without adequate protection. As a result, we have one of the highest rates of health-care worker infection in the world.”

After polling their own members, Hurley said 91 per cent are suffering from anxiety, insomnia and depression as a result of working through COVID-19, and 60 per cent of their members are isolating themselves from their families by living in trailers or basements

“They are extremely anxious that the precautions they have been given fail to meet the standard to protect themselves and the people they care for,” said Hurley. “Despite all of that, they are still going to work every day and work their hearts out, and that is truly heroic.”

The poll also asked Sudburians if the Ontario government should use its emergency powers to order Ontario industry to make PPE. Almost 86 per cent of those who participated in the poll said affirmatively.

Ontario health-care workers had their contract governing job security, scheduling and contracting out over-ridden by provincial emergency orders, something that hasn’t happened in many other provinces, said the poll, which asked Sudburians if they felt health-care staff should be allowed to have their contracts back in operation. Forty-one per cent said yes, while almost 39 per cent said they didn’t know.

Hurley said OCHU will be releasing a human rights complaint within the next few weeks citing discrimination against the elderly and the provision of health care in Ontario. It will be released in conjunction with the Ontario Health Coalition.