The project described by a city engineer as the “holy grail” for easing traffic congestion in Sudbury has been broken down into smaller parts, in hopes of finally attracting provincial and federal funding.
Aug 12, 2012 11:24 PM By: Darren MacDonald 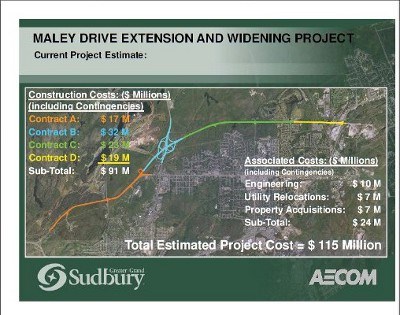 The Maley Drive extension project is now estimated to cost $129 million, up from $115 million in 2009. The sheer size of the project has made getting federal and provincial funding key, since the city can’t afford to do it alone.
The project described by a city engineer as the “holy grail” for easing traffic congestion in Sudbury has been broken down into smaller parts, in hopes of finally attracting provincial and federal funding.

By itself, the Maley Drive extension project is estimated to cost $129 million, a figure that gets larger every year since it was first identified as a priority in Sudbury in the 1980s. By comparison, cost estimates were $115 million in 2009. The sheer size of the project has made getting federal and provincial funding key, since the city can’t afford to do it alone, but the size of the project has also made that difficult.

Traditionally, the feds, the province and the city have each paid one-third of the cost of some major infrastructure projects. But the city can’t proceed until it gets a funding commitment from upper levels of government.
So, at the request of Greater Sudbury Mayor Marianne Matichuk, staff broke the mammoth project into three major sections, as well as fourth other categories.

At its meeting Aug. 14, councillors will see a new plan that starts with completing a section from Municipal Road 35 to Lasalle Boulevard, at a cost of $13 million. That section would be done from spring 2013 until summer 2014. The most expensive section would begin in summer 2013, with $54 million being spent on the Lasalle Boulevard to Barrydowne Road section of the plan, which would take until fall 2015 to finish.

The final section, costing an estimated $26 million, would include the area from Barrydowne to Falconbridge Road, which would take from summer 2015 to Fall 2016 to complete.

In addition to actual road construction, staff has further broken down the plan to include $8 million for engineering and design costs, $6 million to relocate utility services, $15 million for Hydro One relocations and modifications, and $7 million to buy the required land.

Greg Clausen, who retired as the city’s general manager of infrastructure last month, said in an interview that the Maley Drive project would take a lot of heavy trucks off city streets.

“That road would basically finish the loop around Sudbury,” Clausen said.
It would also take more than 10,000 cars a day off The Kingsway and Lasalle Boulevard, making those roads far easier to traverse and allowing development of new housing units in the area to proceed without overloading roadways with new traffic.

“We’ve got to get all that traffic off Lasalle and The Kingsway,” Clausen said. “It’s creating safety issues, and it’s wearing out those roads because they weren’t designed for that heavy volume of truck traffic.”