BY HEIDI ULRICHSEN A Greater Sudbury man who had a bad reaction to his anti-depressant medication in January says he didn’t receive much sympathy when he tried to get some help.
Mar 28, 2007 12:07 AM By: Sudbury.com Staff 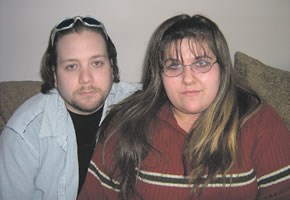 Jonathan Poulin and Joycelyne Collin want to share their experiences after Jonathan experienced a bad reaction to anti-depressant medication.

A Greater Sudbury man who had a bad reaction to his anti-depressant medication in January says he didn’t receive much sympathy when he tried to get some help.

For a couple of days Jonathan Poulin, 27, and his wife, Joycelyne Collin, 29, felt like they were living in a bad movie.

Poulin was admitted to the North East Mental Health Centre (NEMHC). When he left without telling authorities, police officers came looking for him.

The man is telling his story to help prevent his “rude awakening” from happening to someone else.

He says he’s received an apology from NEMHC, but he’s still waiting to get one from the police. Representatives from NEMHC can’t confirm they’ve apologized to him because of privacy legislation.

“I went into the system as a regular old Joe,” he says. “Honestly, if you went to the hospital and said ‘I’m having a bit of a hard time today,’ this could happen to you.

Representatives from NEMHC, Sudbury Regional Hospital and Greater Sudbury Police can’t talk about the case because of privacy legislation. However, they did speak about their policies.

Poulin doesn’t think he is a “head case.” He has an anxiety disorder. Last fall, he started taking anti-depressants for the first time in his life.

His illness had started to make him increasingly anxious and he decided to go on leave from his call centre job.

He contacted his family doctor to get some help for the condition.

He had hoped to see a psychologist, but the doctor told him it would take too long to get an appointment. The doctor prescribed an anti-depressant called Effexor.

The medication caused him to have painful headaches, so he went back to his doctor in mid-January and asked to be taken off Effexor.

Without weaning him off of Effexor, the doctor put him on two other drugs, Lorazepam and Amitripyline, Poulin says.

“I stopped taking (Effexor) and I did exactly what he said for a week,” says Poulin. “Then I started taking these two new pills. Within 48 hours of taking the new medication, something really, really bad happened.”

He began to feel strange while working in the basement of his New Sudbury home Jan. 26.

His wife says Poulin shouted insults at her, cleaned obsessively and wrote profanities on the basement wall. Luckily, the couple’s two children didn’t wake up.

Collin, who works with developmentally delayed people, says she knew enough to stay away from her husband while he was in this condition. He didn’t appear to be a danger to himself or the family, so she didn’t call an ambulance.

In the morning, Poulin didn’t remember anything he had done the night before. He and his wife went to the emergency room at St. Joseph’s Health Centre, arriving around 9 am.

They had hoped to get medical advice about how to get Poulin off the anti-depressants because he was having a bad reaction.

Poulin says he was put in an isolated “crisis room.” When someone else needed the room, he was brought into the public waiting area.

“I was having one of the worse anxiety attacks I’d ever had in my life, to tell you the truth,” he said. “When I’m having an anxiety attack I just ball myself up. I’ll be vocal to talk to Joycelyne, but I’ll say ‘Baby, I’m freaking out’.”

Collin went to ask someone if they could go back in the crisis room, and while she was away, a nurse told Poulin he needed to calm down because he was “being disruptive.”

“They (the police) were literally just poking at me and saying ‘Why can’t you control yourself? What’s wrong with you? What kind of freak show are you? Come on, come on’.”

The police stayed until Poulin was put in another isolated crisis room an hour later, he says.

Around midnight, the hospital found him a room at NEMHC, which provides mental health services in the city. Poulin was also given the option of going home.

The emergency room staff gave him a sealed envelope to present to the staff at the mental hospital. Based on what happened later, Poulin says he thinks there were papers in the envelope that said he was “a total head case.”

However, he did speak about hospital procedures. In any case where there’s a threat of violence at the hospital, the police are called to protect the safety of staff and patients, says Barrette.

As for when a patient is transferred to NEMHC or any other health-care facility from the emergency department, the only thing that would go with them is their chart, he says.

Poulin went to NEMHC thinking he would spend the night there and be able to get advice from a doctor about his medication in the morning.

He says he wasn’t asked to sign any papers when he got there.

After he was admitted, Poulin, still agitated from his medication, asked permission to have a cigarette before bed and was told no.

Staff members grabbed him and brought him to a padded room, he says. He was held down and injected with medication that put him to sleep.

When he woke up the next morning, he says he told the staff he wanted to leave, and they said that wasn’t possible.
Later, when he was out on a cigarette break, his wife helped him leave the hospital.

“There was a group of us out there, and there was a staff member watching us,” he says. “I ran across and sat on the other side of the bushes, and two minutes later Joycelyne shows up, picks me up, and we go home.”

Collin says she got calls from both NEMHC and the police later that day asking where her husband was.

She told them she didn’t know where he was. She says she thought her husband had been through enough and didn’t want him to go back to NEMHC.

Later, she was visited by police officers at her home, and again told them she didn’t know where her husband was.

Around midnight, there was another knock on the door. Collin answered, and three police officers were standing on the stoop.

“They said, ‘We know Jonathan’s here, and we want Jonathan’,” says Poulin. “Joycelyne came upstairs to tell me, and I said, ‘Tell them to bleep off.’ When Joycelyne went downstairs, the cops were in the house.”

The police didn’t show any documentation before they entered the house, she says. They searched the house, including the sleeping children’s rooms, and finally found Poulin hiding in the master bedroom closet, Collin says.

“This is like a scene from COPS,” says Poulin. “They throw the door open, and what I see...is a taser literally two feet from my face. They said ‘Hands up on the bed, let’s go now’!”

Police grabbed him, pushed him on the bed and put him in handcuffs, he says.

Collin has complained to Greater Sudbury Police about the incident.

Supt. Allan Lekun says he can’t comment on what happened to Poulin because his wife submitted a complaint.

The police will review the case and report on their findings to the police board, he says. The review will not be made public.

However, he did speak about how officers are trained to deal with people who are experiencing mental health difficulties.

“At the recruitment level they (police candidates) go through a very stringent training package that addresses dealing with emotionally disturbed persons,” he says.

“There’s ongoing training here at the police service through our annual use of force training programs that deal with the emotionally disturbed.”

Police officers are trained to assess a number of factors before they decide what their course of action should be when responding to an incident, says Lakun.

Poulin says he was brought back to NEMHC, where he was once again injected with medication that put him to sleep.

When he woke up the next morning, he decided to co-operate with the staff.

“Finally, on the third day, a psychologist comes to see me. He basically said, ‘Oops, sorry Jon. Looking at your file, you’re obviously not the head case we thought you were’.”

He was given some different anti-depressants and released from the facility.

Poulin says he’s spoken to staff members at NEMHC, and they’re conducting a review of what happened to him. He says he’ll receive a copy of this review.

Officials with NEMHC cannot talk to the media about what happened to Poulin because of privacy laws. However, they are able to discuss the facility’s regular procedures.

Patients who admit themselves voluntarily into NEMHC don’t have to sign any papers when they are admitted, says Dr. Doug Marr, a psychiatrist at the facility.

Only a physician or a justice of the peace can admit a patient to a mental health facility against their will, he says.

NEMHC patients may be restrained by staff if they say or do something that implies they will put themselves or others at risk, says Marr.

When a patient goes missing from NEMHC, a code yellow is called, says Bonnie Rymal, the executive director of clinical programs and services at the facility.

Staff start out by searching the building. If the patient has privileges that allow them to smoke or take walks, staff check to see if they signed out.

Police are called at some point when staff can’t find the patient, she says. They have the right to bring patients back to NEMHC.

On March 12, the couple spoke to a staff sergeant with Greater Sudbury Police about the situation.

The officer told them the police had used the proper documentation to apprehend him. He also said the police spent “thousands of dollars” looking for Poulin. Snow machines were used to search for him on Ramsey Lake.

Poulin says he had a follow-up appointment with his psychiatrist scheduled for March 24.  He wants to return to his job next month.

Good morning, Sudbury! here are 5 stories to start your weekend
Sep 19, 2020 8:00 AM
Comments
We welcome your feedback and encourage you to share your thoughts. We ask that you be respectful of others and their points of view, refrain from personal attacks and stay on topic. To learn about our commenting policies and how we moderate, please read our Community Guidelines.