Kim Sweeney, the sister of Renée Sweeney, says of the attempted theft: 'I’m just sick someone would do this!'
May 16, 2019 2:55 PM By: Heidi Ulrichsen 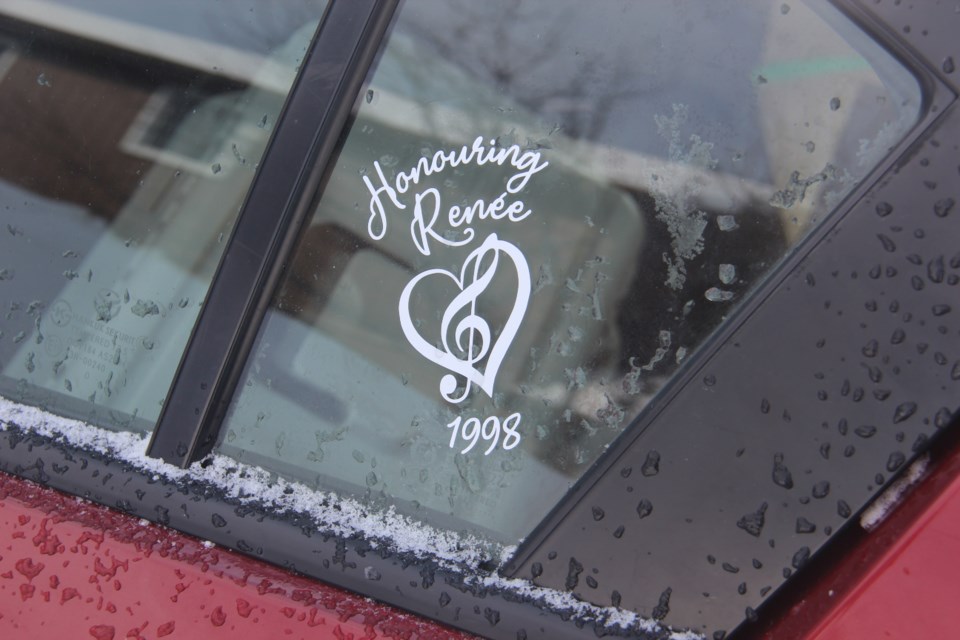 One of the car decals honouring Reneé Sweeney is seen here. (Heidi Ulrichsen/Sudbury.com)

She placed the stickers at several local businesses, asking for donations to the MS Society, Pet Save or SPCA Sudbury.

In early May, a man posing as Kim's brother-in-law went to a local business and tried to collect donations people had given in exchange for the memorial stickers. Kim said she doesn't want to reveal the name of this business.

“I’m just sick someone would do this!” she posted on the Honouring Renée 1998 Facebook site.

Kim explains the business in question never actually had the stickers.

It was, however, one of the businesses she listed on the Facebook site as being a prize donor to a porketta bingo fundraiser for the MS Society she's planned at the Beef and Bird restaurant for May 24.

The fundraiser is in memory of her sister as well as her late parents, who both lived with MS. Watch for a story with further details of this fundraiser on Sudbury.com in the coming days.

Kim said she figures the person who was fraudulently trying to collect the money got the name of the business from the list of donors on Facebook.

She said she found out this had happened from a friend who visited the targeted business. “When I heard that, I said 'Wow, that's not cool,'” she said.

However, she didn't phone police because no money was actually stolen.

“You've got to kind of pick and choose your battles,” Kim said, adding that she would contact police if the would-be thief made another attempt. “I figured that this person didn't get anything.”

Kim said she warned all of the businesses carrying the stickers and donors to her fundraiser not to hand over any money to anyone but herself.

She said that for the most part, the businesses collecting money for the stickers actually donated the funds directly to the relevant charities.

Ironically, the MS Society, one of the charities Kim Sweeney is supporting with her memorial charitable efforts, experienced a break and enter at its downtown Sudbury office.

Donations made to the charity during its Mother's Day weekend carnation sales — an event Kim took part in — were stolen sometime between the afternoon of Monday, May 13 and the morning of Tuesday, May 14.