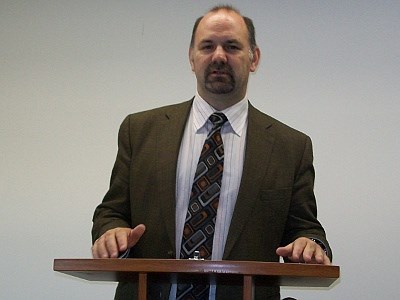 Dr. Chris Bourdon spoke out against the changes to the mandatory long-form census. Photo by Heidi Ulrichsen.

In the past, the long form census was distributed to one-fifth of the Canadian population. It included questions about language, education, employment and occupation.

Representatives of Sudbury Regional Hospital, the Northern Ontario School of Medicine (NOSM), the Sudbury and District Health Unit and the Registered Nurses Association of Ontario gathered at a Sept. 2 press conference to speak out about the issue.

The press conference was organized by the Social Planning Council of Sudbury, which is part of a movement called Save the Census, which opposes the proposed changes to the census.

The long form (census) provides the best way of understanding populations at large.

The government says the long form census, as it existed in the past, is too coercive and intrusive because people had to fill it out under threat of jail time.

It wants to make the long form census voluntary, but distribute it to more households. The government also wants to add some questions to the still-mandatory short census form.

Isabelle Michelle, who heads up the Sudbury and District Health Unit’s research division, said if the mandatory nature of the long form census were taken away, minority groups would be underrepresented in the resulting data. She said those populations are less likely to fill out a voluntary survey.

The information provided by the long form census is critical to health unit researchers, Michelle explained. The data resulting from the questionnaire helps the health unit do things such as identify schools to target for health promotion activities. “Without the information that we can obtain only from the long form census, we would be working in the dark,” she said.

“We would actually need to look at ways of gathering the missing data ourselves, which would incur additional costs, and ultimately not be as robust. We would not be able to compare data from the past and monitor trends.”

Dr. Chris Bourdon, acting chief of staff at Sudbury Regional Hospital, said he’s “not insensitive” to the idea of protecting people’s privacy, which is one of the concerns raised about the long form census. “But...we’ve put mechanisms in place to ensure the privacy of that information.”

He said health care providers want to make decisions that are based on accurate data, and “the long form (census) provides the best way of understanding populations at large.”

Dr. David Marsh, associate dean of community engagement with NOSM, said the government’s plans to change the census would “seriously impact” the medical school’s ability to do good quality research. “(NOSM has made) specific efforts (to improve) the health care needs of francophones and aboriginals across the north,” he said.

“As was mentioned earlier, those are populations that are less likely to respond to a long form survey if it’s not mandatory, which will jeopardize our ability to track the impact of our efforts to improve the health of those populations.”

Janet Gasparini, executive director of the Social Planning Council of Sudbury, said her organization uses long form census information to help shape social policies. She said she thinks the government made its decision without being aware of the “full impact” it would have on the population.

“Early in the summer, somebody made a decision that we really didn’t need this, that it was intrusive, and there was some people complaining that they didn’t like doing this,” she said.

“I think (the federal government) thought ‘Well, we’ll just get rid of that.’ I don’t think they ever dreamed that the response would be what it was. Maybe they’re finding it hard to change horses in the middle of the stream.”
For more information about the Save the Census campaign, go to www.savethecensus.ca.

Earlier this summer, the City of Greater Sudbury sent a letter to Federal Industry Minister Tony Clement, expressing disappointment in changes the federal government is proposing to make to the census process.

Bill Lautenbach, the city’s general manager of growth and development, said at a city policy meeting Aug. 11 that the city is a “heavy user of census data. Any changes to the type of census data or the manner in which it’s collected will impact the accuracy of different city projections and plans that use the data.”

-With files from Bill Bradley