She has been nominated for the International Children’s Peace Prize
Sep 21, 2019 9:08 AM By: Michael Erskine 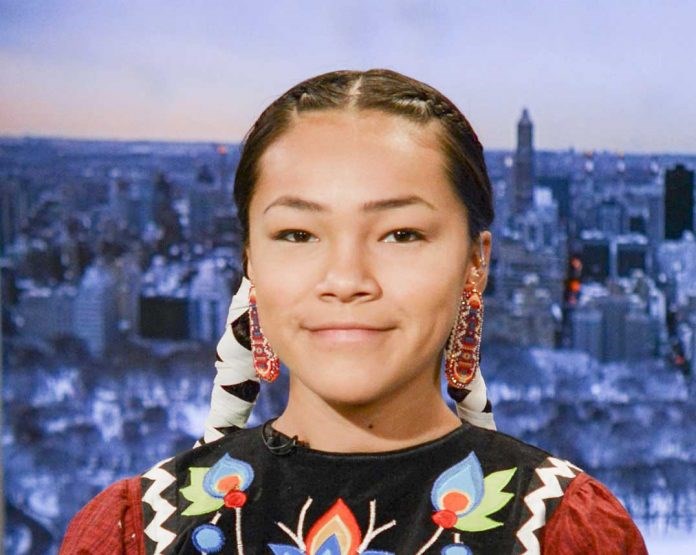 WIIKWEMKOONG – Fourteen-year-old “water warrior” Autumn Peltier, who is from Wiikwemkoong on Manitoulin Island, has been nominated for the International Children’s Peace Prize 2019 by the David Suzuki Foundation.

According to an article published this week by the Manitoulin Expositor, Autumn is representing our nation as the only nominee from Canada out of 137 nominees put forward from around the world.

She has followed in the literal footsteps of her late aunt Josephine Mandamin in bringing the issues of clean water onto the global stage, and was appointed the chief water commissioner for Anishinabek Nation.

“This is pretty exciting,” said Autumn’s mother Stephanie Peltier. “There has been a lot happening recently.”

The 2019 International Children’s Peace Prize is awarded annually to a child who “fights courageously for children’s rights.”

According to the website of KidsRights, the award’s founder, the nominees of 2019 “demonstrate that children are changemakers.” The winner of this year’s award will be announced on September 30.

KidsRights works with children to create a world in which their rights are guaranteed and they are enabled to realize their great potential.
KidsRights said that its organization is “convinced that realizing children’s rights more effectively calls for the perspective, experience and authority of children themselves.”

That is the reason KidsRights first established the International Children’s Peace Prize.

According to the organization, “Each year’s winner has, in his or her own way, demonstrated “tremendous commitment to combating problems that millions of children face. KidsRights believes that children who make a difference in the world should be recognized, awarded and motivated in their incredible effort to improve children’s rights.”

Autumn’s citation reads that she “is an Indigenous girl and a passionate water ambassador. She is fighting for the right of Indigenous Canadian peoples and children to have access to clean water while at the same time acting as the voice for all against the abuse of clean water as our most important natural resource.

“She has been invited to several leadership meetings council meetings and committee meetings to share her wisdom and thoughts about the water and what can be done. “Autumn has stood in solidarity with Standing Rock and raised awareness by having a peaceful protest where she made a North American call out to block highways for one hour to create awareness about the water crisis and support Standing Rock. They blocked the highways.

“She has also been invited to World Water Day to be a keynote speaker at the UN where she told world leaders to 'Warrior Up' for water and for the planet.”