Paula Peroni said she remembers thinking at times she was her own worst enemy as she looked at herself in the mirror in the morning, and pulled on her wig.
Sep 26, 2013 9:16 PM By: Heidi Ulrichsen 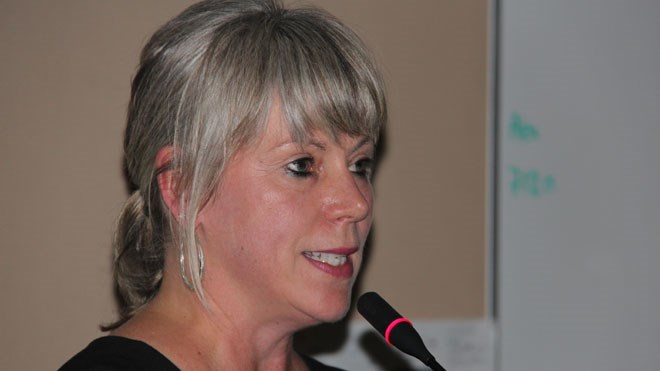 Paula Peroni said she remembers thinking at times she was her own worst enemy as she looked at herself in the mirror in the morning, and pulled on her wig.

She said she thinks she was doing the best thing by only letting her husband, son and mother know about her breast cancer diagnosis in early 2012. Peroni only revealed her diagnosis publicly last May.

“I wanted it that way for many reasons, but most importantly because when you tell someone you have cancer you affect their lives in a way that they didn't ask for,” she said.

“I didn't want people that surrounded me feeling guilty because they couldn't fix what was wrong or they couldn't do what they wanted to do for me.”

The Sudbury Catholic District School Board trustee and Sudbury Progressive Conservative candidate, along with other breast cancer survivors, shared her story with medical students at the Northern Ontario School of Medicine Sept. 26.

She said she went through a gruelling regimen of chemotherapy and radiation treatment. Peroni said she appreciated the honesty of a chemotherapy nurse who told her she'd lose her hair in short order after her first treatment.

“So my son had to shave off my hair, because it was coming off in clumps,” she said. “Man, what a nasty experience that is.”

Peroni said the amount of information breast cancer patients receive is “staggering and overwhelming.” Rather than trying to become a cancer expert, she put her trust in her medical team.

“So in your practice as GPs, or as specialists, or as emerg physicians, you will run into patients who will trust you implicitly,” Peroni said.

“If there is anything you can do today that I can share with you and encourage you to take away, it's to realize what an important and significant role you will play in the lives of people.”

While she said there's great services for cancer patients in Sudbury – not that she accessed many of them, as she was trying to keep her diagnosis a secret – Peroni said Health Sciences North's emergency department needs improvement.

Knowing she probably had a blood clot near her PICC line, she waited in emergency for 16 hours before she asked to be taken home without even being seen. It was later discovered she did indeed have a blood clot.

“Whatever is happening in the cancer treatment centre is not happening in our emerg department,” Peroni said.

“You, as emerg physicians, need to figure out how to make that better, and need to make yourselves heard. You're the experts.

“You have to surround yourself with the best, but you also have to demand the best for your community. I don't know what's happening here in Sudbury, but it needs to be fixed.”

She immediately shared her diagnosis on Facebook, and even started a website detailing what she calls the “good, the bad, the ugly and the raw” of breast cancer – www.trustyourbust.com.

Wahamaa gave the students a detailed description of her treatments to date, even showing pictures of her breast after her lumpectomy surgery.

She said she was touched by the caring nature of the surgeon who performed the lumpectomy, who held her hand before she was put under. It's that kind of lesson she hopes the students will take away.

“You can only read so much in a textbook,” she said.

Breast cancer survivor Annette Cressy told the students how, through a series of circumstances — including diagnostic equipment not yet available in Sudbury — she ended up having four breast surgeries instead of one.

That's what led her to establish Angels in Pink, a charitable group which raises money for the Northern Cancer Foundation, among other causes.

The group has managed to purchase a breast coil table for Health Sciences North's MRI machine, which would have been useful in diagnosing Cressy's breast cancer.

Cressy also had a piece of advice for the future doctors. She said they should encourage patients receiving a cancer diagnosis to bring someone with them.

“It is very overwhelming,” she said. “There are things that my husband heard that I didn't hear, and vice-versa, so four ears are better than two.”

The fourth panel member was Valerie Zuliani, who lost her sister, Janis Foligno — the wife of former Sudbury Wolves coach Mike Foligno — in 2009 to breast cancer.

Northern Ontario School of Medicine professor Dr. Jacques Abourbih asked her how she dealt with the grief of Janis' death. Zuliani said at first she was angry, and even wanted to lash out at the doctors who weren't able to cure her sister.

First-year NOSM medical student Jenna Webber said the panel discussion was definitely “eye-opening.” She said her grandmother died of breast cancer when she was little, and it gave her a better idea of what they went through.

“It's medicine on such an intimate level, and from so many different perspectives,” Webber said.

NOSM faculty member Carita Lanner said she hopes the breast cancer survivors' stories will encourage her students to be more sensitive to patients.

“I think the benefit is to humanize and bring home the message about cancer that it affects real people,” she said.

“They need to keep this in mind as they learn to practise medicine, and not to become too distant.”

The forum was facilitated by Carol Cameletti, assistant professor at NOSM.